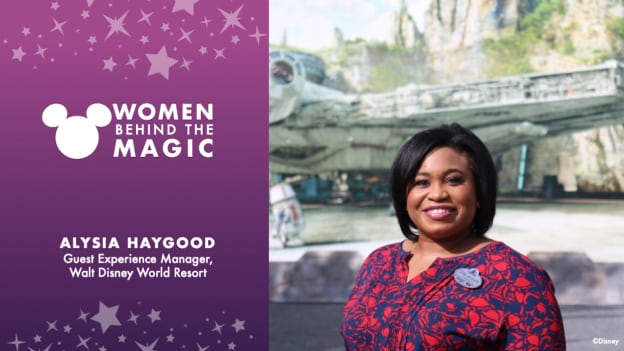 Star Wars: Galaxy’s Edge guests live out their own Star Wars stories on an immersive level like never before. Whether you’re building lightsabers at Savi’s Workshop or creating custom astromerch at Droid Depot, these experiences were made possible by Merchandise Guest Experience Managers like Alysia Haygood. In our next installment of #WomenBehindtheMagic, we’re excited to introduce you to Alysia, her fourteen year Disney career and discuss how she’s an important force behind the magic of Batuu.

Alysia’s first Disney memory came at the age of four when she and her family visited Walt Disney World Resort. During that visit, a family tradition was born and Alysia and her family returned each summer for the next fifteen years. After a decade and a half of exploring the magic as a guest, she was accepted into the Disney College Program while studying International Marketing at the University of Alabama. During the program, she launched the start of her merchandising career in a role managing merchanise at Epcot. After the program, Alysia accepted a few Professional Internships, before accepting a full-time position at the company.

“From the beginning, it just seemed magical to me,” said Alysia.

From her early career at Epcot, she’s worked at the World of Disney at Disney Springs to Disney’s Animal Kingdom, and even assisted in opening Pandora – The World of Avatar. Now, she’s one of eleven Guest Experience Managers who oversee nine different merchandise areas on the planet of Batuu at Star Wars: Galaxy’s Edge.

“I’ve thoroughly enjoyed the range of experience that I’ve gained over the past fourteen years – from working press events to recruiting internationally for the Disney College Program,” shared Alysia.

Over the years, Alysia was a part of the retail experience evolution – as we are now bringing even more immersive retail experiences to our guests. With new products at Star Wars: Galaxy’s Edge, from building lightsabers and custom astromerch to choosing the perfect porg plush, guests can now bring home the memory of the experience as well as the souvenir.

“One of the most exciting aspects of being able to introduce new products is watching guests create memories made possible through immersive merchandise,” said Alysia.

Earlier this year, Alysia was recognized as the first Galaxy’s Edge cast member to receive the prestigious Walt Disney Legacy Award for embodying the values of “dream, create and inspire.” She’s humbled and forever grateful to her peers and fellow cast members who nominated her and to those who saw a reflection of Walt Disney’s ideals in her daily work.

“I’m not sure if anyone truly imagines this accomplishment being achievable, but as a team, we all work toward the same goal each day – to uphold the legacy set forth of inspiring those around us and creating new experiences,” said Alysia.

Alysia is thrilled to bring part of the incredible Star Wars story to life each and every day to travelers. She is just one of the many women bringing Disney magic to guests and fans around the world so stay tuned to the blog for more inspiring #WomenBehindtheMagic stories!