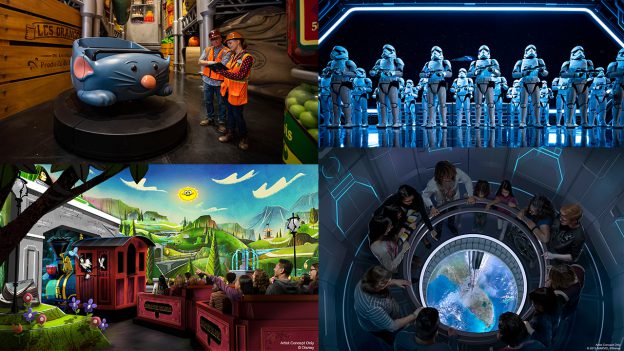 With great new attractions, experiences and places to eat on the way, 2020 is shaping up to be an absolutely thrilling year for guests to visit Walt Disney World, The Most Magical Place on Earth.

If you’re considering planning a Disney vacation in 2020, be sure to check out our 20 reasons why the new year should be the year for your visit!

4. See Epcot’s New Films – New films will debut at Epcot on Jan. 17. “Awesome Planet” in The Land pavilion showcases the Earth’s beauty and diversity in a 10-minute film featuring spectacular imagery, in-theater effects and an original musical score from Academy Award-winning composer Steven Price. “Canada Far and Wide in Circle-Vision 360” in the Canada pavilion is an update to the previous “O Canada!” film with new scenes, a new musical score by Canadian composer Andrew Lockington and new narration by award-winning actors Catherine O’Hara and Eugene Levy. Sing Along to “Beauty and the Beast” in the France Pavilion – The “Beauty and the Beast Sing-Along” will debut in the France pavilion Jan. 17. Directed and produced by Don Hahn, producer of the animated and live-action “Beauty and the Beast” films, the show invites you to participate in a twist on a tale as old as time. It features narration from Angela Lansbury, who played Mrs. Potts in the original film.

5. Celebrate Your Villainous Side at Disney Villains After Hours at Magic Kingdom Park – Disney Villains After Hours which returns to the Magic Kingdom Park on 24 select nights starting Feb. 7. This year, the event will feature a new Villains Caravan that will feature favorite baddies like Gaston, Oogie Boogie, Cruella de Vil, Captain Hook and more! Check out Sarah’s recent blog post for full details.

7. Journey to Space 220 for ‘Out of this World’ Cuisine – Set to open this winter, Space 220 restaurant will offer a one-of-a-kind dining experience. You’ll board a special elevator for a journey 220 miles above Earth to a space station where you’ll enjoy fantastic meals and drinks while taking in views that are truly out of this world.

10. Take in the Topiaries During Epcot International Flower & Garden Festival – Welcome spring’s arrival with this popular festival, which runs March 4-June 1. This year’s event will feature delectable bites at outdoor kitchens, as well as dozens of world-renowned, Disney-themed topiaries. In addition, the Garden Rocks Concert Series will include three shows a day for all 90 days of the event.

11. Hop Aboard Mickey & Minnie’s Runaway Railway at Disney’s Hollywood Studios – Mickey & Minnie’s Runaway Railway, set to open March 4 at Disney’s Hollywood Studios, will be the first Disney ride-through attraction featuring Mickey Mouse and Minnie Mouse. Here, you will travel inside a Mickey cartoon for a fun-filled adventure where “Mouse rules apply” and anything can happen!

12. Step Into the Mickey Shorts Theater – A new Mickey Mouse-inspired theater will debut at Disney’s Hollywood Studios in March. Stop in to watch an original cartoon short and enjoy special photo opportunities.

13. Prepare to Be Astounded at the New Cirque du Soleil Show ‘Drawn to Life’– Get ready to journey into a world where an animator’s desk becomes the stage and drawings come alive. Tickets are already on sale (including preview performances in March), so grab your seats now!

15. Savor a Sweet Treat at La Creperie de Paris in Epcot – La Crêperie de Paris, offering both table- and quick-service options, opens this summer. The menu from celebrity chef Jérôme Bocuse is inspired by the Brittany region of France.

16. Epcot International Food & Wine Festival Will Spice Up Fall –The aromas and flavors of global marketplaces will welcome you to the 25th anniversary of this fan-favorite festival. You’ll have a chance to meet celebrity chefs, try new food and wine pairings, and listen to great music during the Eat to the Beat Concert Series.

18. Gather for ‘Harmonious’ at Epcot – In 2020, Epcot is on track to debut the largest nighttime spectacular ever created for a Disney park. It will celebrate how the music of Disney inspires people the world over, carrying you away harmoniously on a stream of familiar Disney tunes reinterpreted by a diverse group of artists from around the globe. The show will feature massive floating set pieces, custom-built LED panels, choreographed moving fountains, lights, pyrotechnics, lasers and more. Stay tuned to the Disney Parks Blog for more.

19. Lasso Some Grub at Roundup Rodeo BBQ at Disney’s Hollywood Studios – Roundup Rodeo BBQ, a new table-service location, is riding into Toy Story Land in 2020. This immersive restaurant will surround guests with a kaleidoscope of toys, games, and playsets while serving up delicious dishes.

20. Celebrate many milestones at Disney’s Animal Kingdom Theme Park – It’s the 50th anniversary of Earth Day and the 25th anniversary of the Disney Conservation Fund. Plus, our gorilla family will be celebrating Lilly’s 10th birthday and Grace’s 1st birthday this spring!

Which attraction or offering are you most excited to experience in 2020? Tell us in the comments section below!