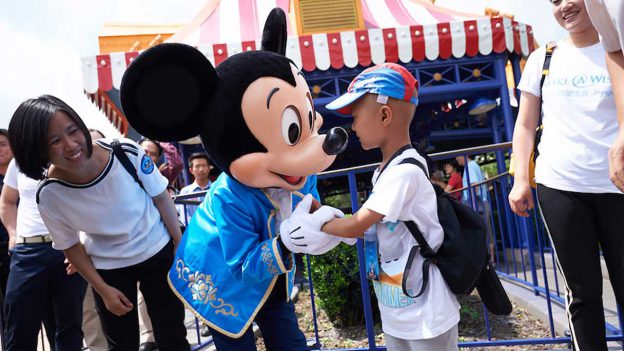 We know that Make-A-Wish and Disney Parks grant wishes year-round and that this type of wish granting is one of the most requested choices amongst wish kids. Today, we’re taking a look back at some highlights from the last few years with a couple of our favorite stories from Disney Parks – you may even remember some of them!

The “Key to the Kingdom”

Back in September of 2019, we met wish kid Linden Bradley shortly after he learned that he was cancer-free. Linden is from British Columbia, Canada and his one true wish was that he would get the opportunity to open up the gates at Disneyland park, and he was given just that. Linden was surprised by none other than Mickey Mouse, along with Disneyland ambassador, Justin, and was given the “Key to the Kingdom,” allowing him to be one to open up the gates to the park and officially kick off the day of magic for everyone visiting that day.

“He’s been through more than I think any of us combined have been through,” said his mom, Julia Bradley. “Hopefully, this will be the memory that he remembers instead of all the bad times with cancer — he got to open Disneyland!”

In September of 2017, Shanghai Disney Resort joined in with the rest of Disney Parks to start granting wishes to wish kids for Make-A-Wish, starting with Yuanbao from China’s Anhui Province. Yuanbao’s wish was to meet Olaf the lovable snowman from “Frozen,” so on his trip to Shanghai Disneyland he was welcomed at the Royal Banquet Hall by Olaf and Elsa for a magical encounter he’ll never forget. He was even surprised with the honor of being the Grand Marshal in the parade that day.

Cooking It Up with Chef Jeff

In 2012, wish kid Winter visited Disney’s Polynesian Village Resort at Walt Disney World Resort and was inspired by a chef who went above and beyond to help her. Chef Jeff, a sous chef at the resort, was just doing his job by assisting with Winter’s dietary restrictions and talking through alternative options during a meal at ‘Ohana, but the extra work he put in to help Winter sparked her fascination with the culinary arts which led to her wish of coming back to cook with the chef who inspired her.

Then in 2018, Winter and her family returned to Disney’s Polynesian Village Resort to fulfill her wish of cooking with the chef who inspired her. The two were reunited and worked together to create spring rolls with a peanut dipping sauce, marking another magical wish granted!