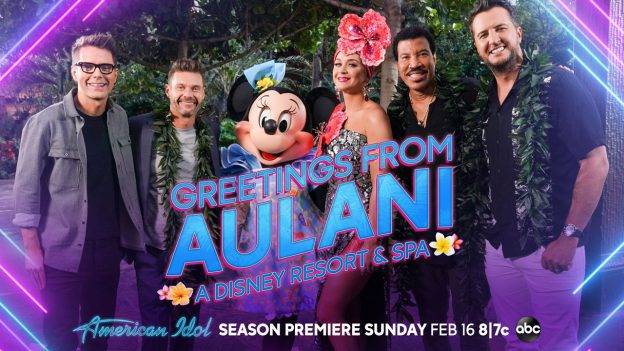 Aloha! We’re excited to announce that ABC’s “American Idol” will return once again to Aulani, A Disney Resort & Spa, soon to film its showcase round. The all-new season of ABC’s “American Idol” begins Sunday, February 16 (8:00-10:00 p.m. EST). Stay tuned every week to catch the episode filmed at Aulani Resort, and see contestants enjoy a Hawaiian paradise with a touch of magic.

Aulani, A Disney Resort & Spa is nestled in Ko Olina, Hawai‘i, a respite from the busy and frequently visited locations of other Hawai‘i destinations. It’s a place where guests can connect to nature and the culture of Hawai‘i, a fitting backdrop as new American Idol contestants share their own authentic voices.

Just as the American Idol contestants work with mentors to hone their craft, the Walt Disney Imagineers worked in partnership with local artisans and cultural experts to create Aulani when the resort was originally built among 21 oceanfront acres. The resort is inspired by the natural beauty and rich traditions of Hawai‘i and celebrates the culture, history and welcoming spirit of the islands.

The episode will feature the American Idol all-star judges Luke Bryan, Katy Perry and Lionel Richie, along with Emmy-winning producer and host Ryan Seacrest, and multimedia personality and in-house mentor Bobby Bones, as they experience Aulani and contestants compete to become the next American Idol.