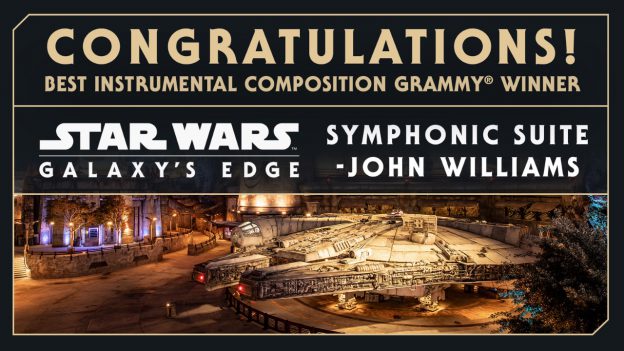 Star Wars: Galaxy’s Edge was recognized at the 62nd Annual Grammy Awards for its iconic, original theme created by legendary composer, John Williams. This Grammy marks the 25th win for the Oscar-winning composer.

While dreaming up the lands, Imagineers knew Batuu needed its own music to mark a unique sense of place within the Star Wars universe.

“When we were developing the soundtrack to Star Wars: Galaxy’s Edge, we knew the incomparable John Williams was the only composer for the job,” said Matt Walker, head of the Walt Disney Imagineering Music Studio. “Congratulations to the Maestro on this Grammy award.  We all feel privileged to be a part of it.”

Star Wars: Galaxy’s Edge has welcomed millions of visitors since opening at both Disneyland and Walt Disney World Resorts. The land recently received the theme park industry’s highest honor with a Thea Award for Outstanding Achievement.

The original theme is available to stream on Apple Music.