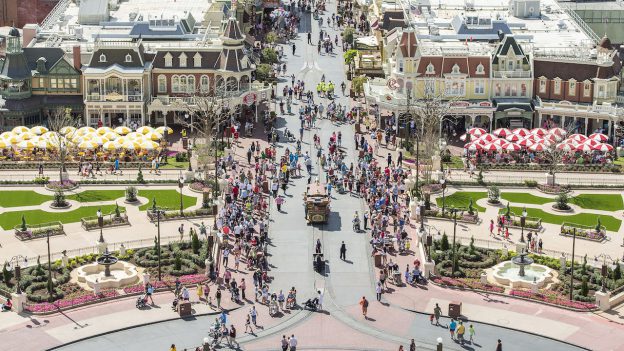 You might find it hard-to-believe but Main Street, U.S.A. is my favorite area of Magic Kingdom Park at Walt Disney World Resort. You might ask, “Of all the things to see and do, why is Main Street your favorite Magic Kingdom location?” The simple answer is because I’m in love. . . with its design and architecture!

I grew-up with Main Street, U.S.A. at Disneyland park in California. Intimate in scale and cozy in atmosphere, Main Street at Disneyland is deeply rooted in small town rural America. Its Victorian-era inspired architecture, with its fanciful ornamentation and gingerbread, is applied in just the right amounts to accurately evoke a little town that was of its time, place, and level of prosperity. Although I have great affection for Main Street at Disneyland my true love resides nearly 2,500 miles to the East.

Ironically, I fell in love with Main Street in Magic Kingdom Park long before the park even opened in 1971. Now before you think I’ve really lost my senses let me explain. In 1969 I went with my family to see a brand-new movie musical called “Hello, Dolly!” I’m sure some of you are familiar with this now classic film?

I sat there in the theater (admittedly not without protest) waiting for the movie to start and thumbing through the road-show program. It was there I learned that the film’s legendary director, Gene Kelly, had recreated turn-of-the-century New York City on the backlot of 20th Century Fox Film Studios in Hollywood. As an unsophisticated kid I wasn’t into the music, dancing, or any of that; instead I was enthralled by something that reminded me of Main Street at Disneyland but on a much grander scale (and no, it wasn’t the smell of freshly made movie theater popcorn).

What I saw on-screen was a fantastic recreation of 1890s New York (complete with elevated railway). It was astonishing! It was seemingly enormous! And it was all movie magic! But it was so believable and appealing I wanted to go there!

Cut to a few years later and my first visit to Walt Disney World Resort. As I emerged from under the train trestles of the Walt Disney World Railroad my jaw-dropped! I had a sense of déjà vu. Yes, it reminded me of Main Street at Disneyland park but was much more exaggerated. I knew this fantastical turn-of-the-century setting!

It was only later, while working at Walt Disney Imagineering in the early 1990s, did I learn that Oscar-winning art director and production designer John DeCuir Sr., worked on design elements of Magic Kingdom Park (Liberty Square, Tomorrowland, etc.). His classic film credits include “The Bride of Frankenstein,” “The King and I,” “South Pacific,” “Ghostbusters” and wait for it (the film for which he won one of his three Academy Awards) . . . “Hello, Dolly!”

Although DeCuir didn’t contribute to the design of Main Street at Magic Kingdom Park, what I saw before me was very reminiscent of his design work on “Hello, Dolly!” According to the 1970 “Preview Edition: Walt Disney World” brochure, “Old-fashioned shops and restaurants will be similar, architecturally, to elegant turn-of-the-century Eastern resorts such as New York’s popular Saratoga Springs.”

What was before me was less a small rural town like Main Street at Disneyland park and more of a larger, bustling, architecturally sophisticated township with East coast design sensibilities of the ragtime era of 1890-1910 with an abundance of awnings, covered porches, interior spaces, and lots of eye-candy. From the enormously impressive Hospitality House (now the Town Square Theater), to the Main Street Station of the Walt Disney World Railroad, to the elaborate Emporium, it was a Victorian, turn-of-the-century setting better than anything that could have ever really existed. It was like being on the greatest movie set in the world except it was real! I was hooked!

From the enormously impressive Hospitality House (now the Town Square Theater), to the Main Street Station of the Walt Disney World Railroad, to the elaborate Emporium, it was a Victorian, turn-of-the-century setting better than anything that could have ever really existed. Even the recently re-imagined Magic Kingdom Central Plaza, with its fountains, pathways, and colorful gardens, seems like a frame of cinematic visual magic.

Today, Main Street, U.S.A. remains my favorite realm of Magic Kingdom Park. As for “Hello, Dolly!” my appreciation for the film has evolved exponentially since 1969. It is now one of my favorite movies and, cinematically, always reminds me of happy times spent on Main Street at Walt Disney World Resort.