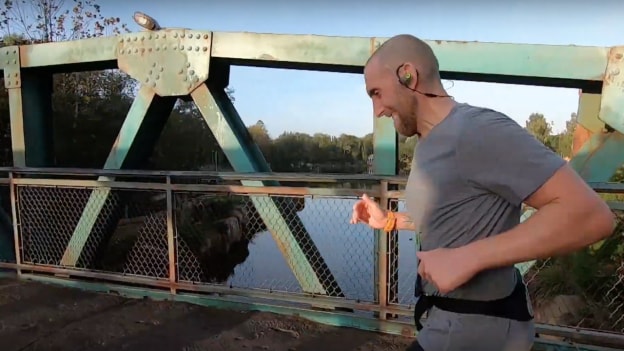 In 2017, Greg Cohen, a fitness trainer who had always led an active lifestyle, unexpectedly began experiencing numbness and pain in his hands and limbs, the result of a rare and incurable autoimmune disease called scleroderma. But Cohen, who lives in Los Angeles, didn’t let that stop him from tackling the Walt Disney World Marathon last Sunday.

It was quite a feat for Greg who still grapples with the disease, which afflicts roughly 10 percent of men. The disease has one of the highest fatality rates of autoimmune diseases and causes pain, numbness, and little feeling in joints and connective tissue, as well as hardened skin, making it really difficult to run.

Nevertheless, Greg had the strength to overcome the pain and complete the 26.2-mile race that took him and more than 14,000 other runners through all four Walt Disney World theme parks. This was the first of four marathons he is running in 2020 to raise awareness about scleroderma.

The marathon culminated a weekend of races at Walt Disney World Resort, which included a 5K, a 10K, a half marathon and kids races. It was also the second of six race weekends during the 2019-20 runDisney season, with the next race weekend being the Disney Princess Half Marathon Weekend, February 20–23, at Walt Disney World Resort. For more information, visit www.rundisney.com.