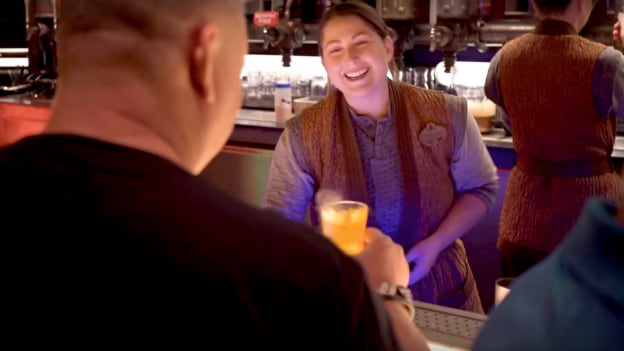 Oga’s Cantina inside Star Wars: Galaxy’s Edge is one of the liveliest places you’re likely to find at a Disney park. The watering hole on Batuu features a spirited soundtrack provided by DJ R-3X, pulsing lights, and more types of colorful and flavorful drinks than you could shake a gaffi stick at.

The cantina became an instant favorite when Star Wars: Galaxy’s Edge opened at both Disneyland park in California and Disney’s Hollywood Studios in Florida. Beyond sipping on a delicious Carbon Freeze or munching on some Batuu Bits, what makes Oga’s Cantina a “must-do” experience is how Disney Cast Members bring the place to life for guests. Whether it’s singing songs or other special interactions – with one another and their guests – they go above and beyond each day to help you feel like you’re on your own Star Wars adventure.

“We really want our guests to feel like they are truly immersed in the world of Star Wars, and our cast members are critical to making that immersion happen,” says Sean Marshall, project manager for operations training at Walt Disney World.

Take a look at this video for a peek inside Oga’s Cantina and see how Disney cast members make each visit special.

Because Oga’s Cantina is such a popular spot on Batuu, it’s a good idea to make a reservation ahead of time. Click here for Disneyland park, and here for Disney’s Hollywood Studios. After that, you can start thinking about whether a Blue Bantha or a Jabba Juice is more your speed – or maybe both!