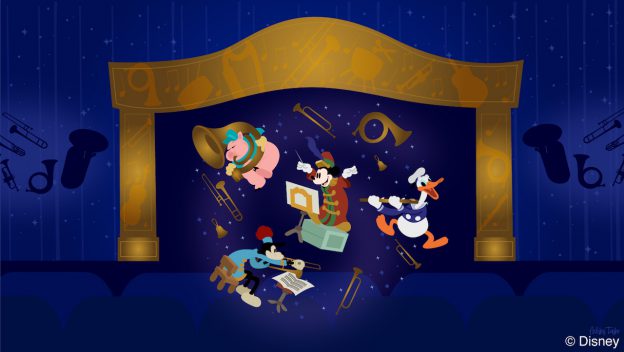 The 1935 short “The Band Concert” is one of my all-time favorite Disney short films. And today, it’s the inspiration for this week’s Disney Doodle.

In the short, Mickey takes on the role of bandleader, directing a concert band for a lovely performance in a local park. Mickey must guide the group through the show when ice cream vendor-turned flutist Donald Duck inserts himself into the show. Then a nosy bumblebee turns up to pester Donald and ends up wreaking havoc on Mickey and the rest of the band members. When a tornado unexpectedly sweeps through the park, “the show must go on!” with Mickey at the baton.

According to artist Ashley Taylor, if Bandleader Mickey ever had the chance to visit the Walt Disney World Resort, he may wish to take his turn directing music over at Mickey’s PhilharMagic at Magic Kingdom Park.

“Mickey’s Band Concert has performed throughout all kinds of unexpected situations,” Ashley said. “It’s easy to imagine them being able to handle performing at Mickey’s PhilharMagic.”