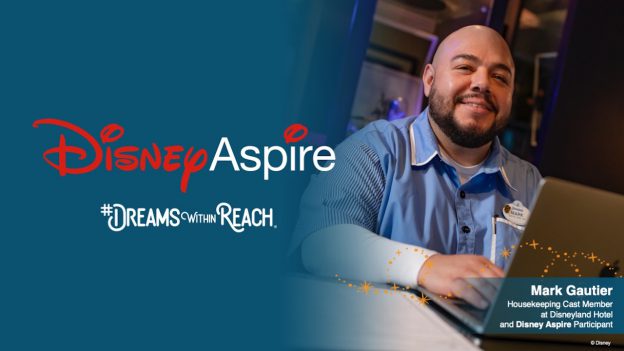 Dreams Within Reach: Disneyland Hotel Cast Member Gets a Second Chance at Life and Enrolls in Disney Aspire

Whether they’re pursuing a career at Disney in Human Resources or aiming for a legal career, more than 12,000 eligible cast members have enrolled in Disney Aspire and are reaching their educational goals and dreams!

Our 100% tuition-paid education investment program gave Mark Gautier, a Disneyland Hotel Housekeeping cast member, a fresh start and a new opportunity to put his #DreamsWithinReach. Mark has already completed the College Start program to complete his GED coursework. Now he’s pursuing a bachelor’s degree in graphic design from Bellevue University and is the first in his family to attend college.

At the heart of Mark’s decision to enroll in Disney Aspire is a strong willingness to make the most out of life. In 2013, Mark fell into a coma for two weeks from diabetic shock where his heart stopped three times before a team of doctors and nurses were thankfully able to revive him. Once Mark awoke, he discovered that he had lost his writing and drawing abilities but gained a fresh perspective on life and dedicated himself to becoming healthier.

To meet his health goals, Mark and his now-wife, Vanessa, became Disneyland Resort Annual Passholders to make exercise fun. Surpassing all of his expectations, Mark not only fell in love with the parks but the company too. He was welcomed to the Disney cast member family in 2016 as a Disneyland Hotel Houseman.

“It was the ambiance, the detail and the artwork,” recalled Mark. “I was amazed by everything, and I wanted to be a part of it.”

Growing up in Santa Ana with beautiful murals throughout an art district, Mark always had a passion for art. Now thanks to Disney Aspire, Mark is not only creating again after losing his writing and drawing abilities, but is pursuing a bachelor’s degree in graphic design.

“I was given another chance at life, and once Disney Aspire came about, it was a second chance at my education, said Mark. “I have so much to look forward to and it’s important to make the most out of this journey because it’s not only an opportunity for myself, but for my wife and daughter!”

We’re proud of Mark and his journey to live a healthier and happier life. Since his health scare in 2013, he’s lost 150 pounds, gotten married, welcomed a 1-year-old daughter, joined The Walt Disney Company as a Cast Member and enrolled in Disney Aspire.

“I want my daughter to grow up and for her to be proud of me,” shared Mark. “I want to show her that it’s never too late, and to never give up on her dreams.”

Stay tuned for more inspirational stories about how Disney Cast Members are putting their #DreamsWithinReach with Disney Aspire as the program continues to welcome new participants and expand its network of offerings, with additions like Purdue University Global and Southern New Hampshire University – announced this month.

Likes (12)
Share Dreams Within Reach: Disneyland Hotel Cast Member Gets a Second Chance at Life and Enrolls in Disney Aspire

Destinations: Dreams Within Reach: Disneyland Hotel Cast Member Gets a Second Chance at Life and Enrolls in Disney Aspire

Topics: Dreams Within Reach: Disneyland Hotel Cast Member Gets a Second Chance at Life and Enrolls in Disney Aspire