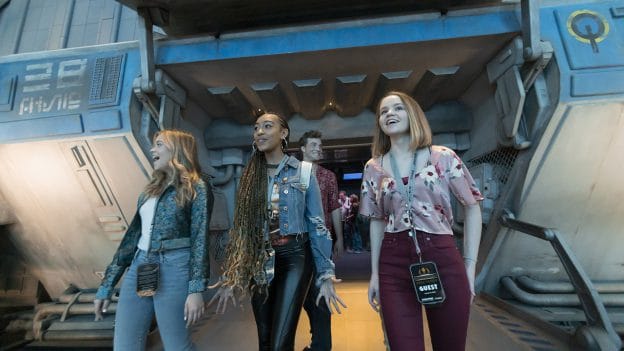 The Cast of Hulu’s ‘Little Fires Everywhere’ and ‘Dollface’ Join the Resistance at Star Wars: Galaxy’s Edge at Disneyland Park for a Day

Star Wars: Rise of the Resistance is officially open in Star Wars: Galaxy’s Edge at Disneyland park, and the stars of the Hulu hit series “Dollface” and upcoming series “Little Fires Everywhere” recently joined the Resistance in a battle against the First Order in this immersive new experience!

Star Wars: Rise of the Resistance draws you into a sprawling narrative that blurs the lines between fantasy and reality, delivering thrilling action driven by cutting-edge technology and innovative design that gives you the feeling of stepping inside a Star Wars film.

Then, the recruits stepped into the Hangar Bay and were awestruck to find 50 stormtroopers ready for their arrival. The fearless Brenda Song even snapped a quick picture before First Order guards detained the new recruits.

The group then boarded a Star Destroyer for an epic adventure that put them in the middle of a battle with the First Order. Thankfully, everyone eluded the clutches of Kylo Ren! Phew.

Finally, the Resistance fighters explored Batuu and encountered some notorious rebels. Who can resist a hug from our favorite Wookie, Chewbacca, or a run-in with R2-D2? The resourceful astromech droid has shown great bravery in rescuing his masters and their friends from many perils!

…and after a full day of adventure, everyone was thirsty for some Blue and Green Milk. Yum!

You can catch these friendly rebels on HULU. Season 1 of ‘Dollface’ is streaming now and the series ‘Little Fires Everywhere’ premieres on March 18, both only on HULU.

Likes (9)
Share The Cast of Hulu’s ‘Little Fires Everywhere’ and ‘Dollface’ Join the Resistance at Star Wars: Galaxy’s Edge at Disneyland Park for a Day