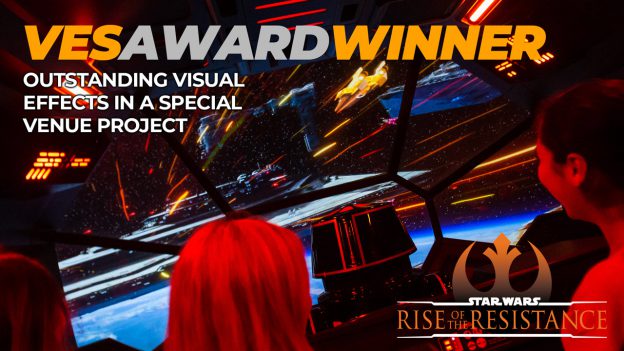 Each year, the Visual Effects Society (VES) recognizes outstanding visual effects in film, television and other media with the annual VES Awards. We are thrilled that last night Star Wars: Rise of the Resistance received a VES award for Outstanding Visual Effects in a Special Venue Project!

Star Wars: Rise of the Resistance places guests in the middle of a climactic battle between the First Order and the Resistance. Collaborators from Walt Disney Imagineering and Lucasfilm, Ltd., seamlessly blended cutting-edge technology with innovative design to deliver a thrilling Star Wars adventure that blurs the lines between fantasy and reality.

In addition, the land was honored with the Advanced Imaging Society’s Lumiere Award for best Location Based Entertainment, and last week the music to the land was recognized with a GRAMMY award.