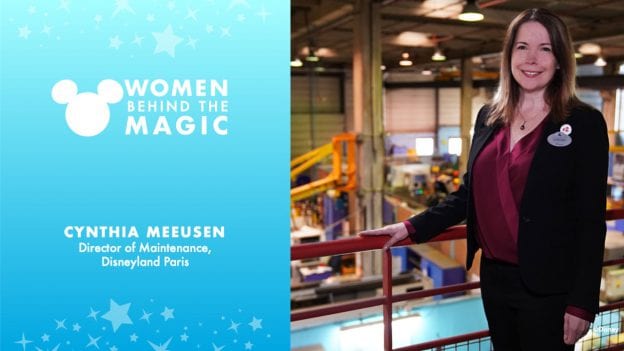 Women Behind the Magic: Cynthia Meeusen on Bringing Upcoming Expansions to Life at Disneyland Paris

Bonjour! Whether they’re managing immersive merchandise experiences or bridging the gender gap in the technology field, thousands of #WomenBehindtheMagic across the globe deliver Disney magic to guests every day.

For Cynthia Meeusen, Director of Attractions Maintenance, Central Shops and FOS Development and Integration at Disneyland Paris, making magic means ensuring the performance and safety of attractions and experiences in the parks. She also is helping to develop the upcoming expansion of Walt Disney Studios Park – which includes a new Marvel-themed area called Avengers Campus, along with “Frozen” and Star Wars-themed areas, part of a multi-year park expansion that will begin opening in phases in 2021.

Cynthia was drawn to her current role because of her love for science. As a child she was always drawn to solving real, tangible problems – which fit well with biology, math, physics, and understanding people.  Whether she’s designing a new system for guests to experience or repairing a technical problem, she finds it rewarding to see the immediate result that brings magic to guests.

“My career aspirations as a child rotated between astronaut, cement-truck driver and ballerina, shared Cynthia. “I was well rounded!”

Cynthia’s Disney career began in 2001 as a Biosystems Engineer for the Epcot Science team at the Walt Disney World Resort. Seven years later her career went international when she accepted a short term assignment in January 2008 at Disneyland Paris to assist with Crush’s Coaster attraction reliability.

“I said yes! Then, once I was on site for a few months, the Director of the Engineering team asked if I would be interested to stay on the team full-time as Principle Engineer – and I said yes again,” explained Cynthia.

At that point, Cynthia was responsible for the Disneyland Paris Scientific Systems team – the group of engineers and support staff who design the electric and electronic systems that run attractions and shows. She briefly returned to Orlando in 2015 to tackle major Walt Disney World expansions including, Pandora – The World of Avatar at Disney’s Animal Kingdom, along with Toy Story Land and Star Wars: Galaxy’s Edge at Disney’s Hollywood Studios.

All these opportunities led her to where she is today. In 2016, she became Director of Attractions Maintenance at Disneyland Paris. Today, her team is made up of approximately 900 technicians, artists, engineering specialists and support staff who are responsible for the technical function and show sparkle in both parks.

‘Pandora – The World of Avatar’, was a project that will always stand out to Cynthia. However, she sees the upcoming expansion of the Walt Disney Studios Park as an opportunity to take guest offerings here at Disneyland Pairs to the next level!

“Disneyland Paris has invested an incredible amount into this amazing expansion – with new lands, park features, shows and attractions,” Cynthia explained. “The overall plan is wonderfully diverse and rich, and it will change the face of our parks forever. I’m very excited to help bring this vision to life!”

When Cynthia first arrived at Disneyland Paris in 2008, she didn’t know a word of French, and thought her visit would only last for three months. More than ten years later, she still calls Disneyland Paris home and now leads an incredible team.  Her advice for other young women who aspire to work in this typically male-dominated field is to not self-impose limitations. Be brave, be positive, and accept challenges.

“I’m lucky to work for a company where diversity and inclusion matters,” said Cynthia. “At Disney, we celebrate equality, and I’m proud to be part of a generation of female leaders who can inspire other young ladies to aim for a technical career.”

Cynthia is just one of the many women bringing Disney magic to guests and fans around the world, so stay tuned to the blog for inspiring #WomenBehindtheMagic stories. Au revoir!