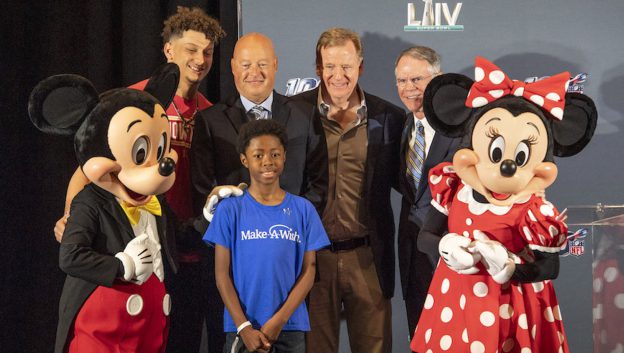 Chapek, Mickey Mouse and Minnie Mouse, NFL Commissioner Roger Goodell and Mahomes were joined this morning by Make-A-Wish America President and CEO Richard K. Davis as well as Nathaniel, 10, a Make-A-Wish child from Texas. Nathaniel and 17 other Make-A-Wish kids, who attended the Super Bowl as their wish, will now travel today to Walt Disney World Resort to continue the celebration of the Chiefs’ victory.

Together, Disney and Make-A-Wish have granted more than 140,000 wishes to children facing serious illnesses around the world. The first official wish granted to a Make-A-Wish child involved a trip to Disneyland Resort nearly 40 years ago. Currently, Disney helps grant more than 10,000 wishes each year.

The Make-A-Wish donation Monday morning followed the Chiefs’ Super Bowl victory in Miami on Sunday night. After his dazzling performance, in which he led a furious fourth-quarter comeback by tossing two touchdown passes, Mahomes looked into the cameras and shouted that famous line: “I’m going to Disney World!” Mahomes joins some of the biggest names in Super Bowl history by delivering that famous phrase, which has become part of an iconic Disney TV commercial airing nationally this week.

Joined by the Make-A-Wish child, Mahomes is celebrating his performance and the Chiefs’ victory today with a festive day at Walt Disney World Resort. Mahomes will be the star of a colorful parade down Main Street, U.S.A. at Magic Kingdom Park and will interact with beloved Disney characters and cheering fans. You can watch a special livestream of the parade right here on the Disney Parks Blog, starting at approximately 2:40 p.m. ET.