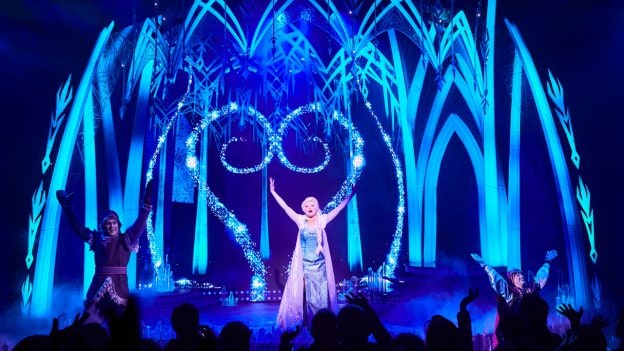 Frozen: A Musical Invitation According to Imagineers Matt Walker and Yaron Spiwak

Music is an essential part of the magic in Frozen: A Musical Invitation, a new show which premiered at Disneyland Paris in Walt Disney Studios Park last November. To learn more about the music that brings to life this unique interactive experience, we talked with Matt Walker, head of Walt Disney Imagineering’s Music Studio, and senior music creative director Yaron Spiwak.

Keep reading for a few inside details on how the team adapted the iconic music of Walt Disney Animation Studios’ Frozen for this all-new show!

How did you adapt the music to the needs of the experience?

Matt: Frozen: A Musical Invitation is an immersive theater, multi-media experience. Because of that, it draws from all our different backgrounds: live performance theater, attraction and film. It’s one of the things that makes this job fun.

Yaron: One of our first challenges was – when you first enter the room – we had to find a way to recap the movie for guests without using any dialogue. So, we created this medley that encapsulates a lot of the songs in a way that’s both poignant and heroic, which gets guests excited to see the show. The first time the show directors heard it, they got very emotional. I did, too.

How did you stay true to the original music?

Matt: It’s very important for us to produce music that belongs and feels authentic to the original film. The first step is determining the creative needs for that production. We would sit with the creative team in Paris to discuss their needs. For example, how can we take the beloved music of Frozen and re-arrange it, re-record it so that the guests have the same experience they had in the film and even take them to a higher level of immediacy and intimacy? We also researched heavily the original orchestrations and then began to adapt those for the needs of the show.

Were the original songwriters involved in the project?

Matt: Absolutely. We want to make them feel as enthusiastic and excited as we are about our project. When I showed Bobby Lopez and Kristen Anderson-Lopez the recording of Andrew Cottee and how he adapted the arrangement of “Let It Go,” bringing even more fever to the piece for this particular production, they were moved to tears. It was a beautiful experience.

How was it recording at Abbey Road Studios in London?

Matt: Since we were going for this almost magical, ethereal quality of different moments in the score, when we were able to book Studio One at Abbey Road – the world’s largest recording space – we knew we were in for a phenomenal treat. It was great to see the directors’ and the producers’ eyes light up when they heard the music for the first time live.

Yaron: To hear the same thing you’ve heard so many times played by real instruments is really magical. I always think of recording sessions like a holiday. You work so hard for so long and then everything comes to life. It’s very emotional for everyone on the team.