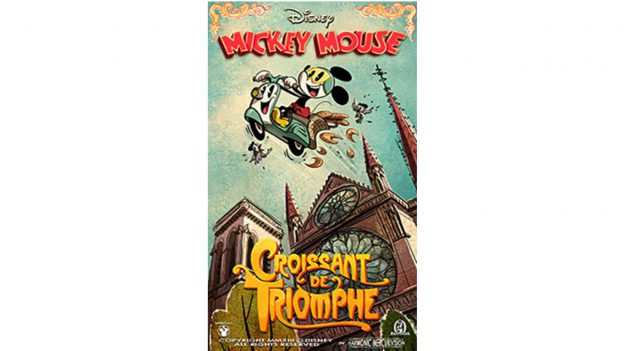 Now that we’re less than a month away from the March 4 debut of Mickey & Minnie’s Runaway Railway at Disney’s Hollywood Studios, we’re continuing our weekly countdown art series with a special poster inspired by Mickey’s popular “Croissant de Triomphe” short.

Our newest poster features a whimsical look at Mickey speeding through Paris! In the video short, Minnie’s cafe runs out of croissants and Mickey must go on a wild ride battling traffic and a few surprises to deliver the treats.

Soon, you’ll be able to experience your own amazing journey full of surprises in Mickey’s wild cartoon universe at Mickey & Minnie’s Runaway Railway attraction.  During each adventure, you’ll enter the NEW Mickey Mouse cartoon short “Perfect Picnic” for a one-of-a-kind adventure where anything can happen. Why? Because here, mouse rules apply!

At Mickey & Minnie’s Runaway Railway, you’ll see posters of these existing award-winning shorts that might have previously premiered at the Chinese Theatre – all created specifically for the attraction by Walt Disney Imagineering and Disney Television Animation.

Be sure to keep checking the Disney Parks Blog for more exclusive poster art inspired by the video shorts in the coming weeks. In the meantime, be sure to check out the “Croissant de Triomphe” short for a look inside an amazing cartoon universe you’ll be able to enjoy at Mickey & Minnie’s Runaway Railway beginning March 4, 2020, at Disney’s Hollywood Studios and later at Disneyland park in 2022.