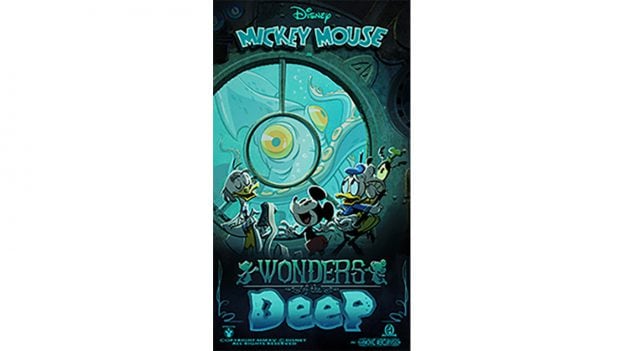 We’re now less than a week away from the much-anticipated debut of  Mickey & Minnie’s Runaway Railway at Disney’s Hollywood Studios! And to celebrate, we’re continuing our ongoing countdown series with special art inspired by the “Wonders of the Deep” short.

Our new “Wonders of the Deep” poster features Mickey and friends – as well as a surprise visitor from the depths of the ocean! In the video short, a submarine voyage turns wild when Mickey and friends have to rescue Professor Von Drake from a giant sea creature.

Next week, you’ll be able to experience Mickey’s wild cartoon universe like never before at Mickey & Minnie’s Runaway Railway attraction.  During each adventure, you’ll enter the NEW Mickey Mouse cartoon short “Perfect Picnic” for an one-of-a-kind adventure where anything can happen. Why? Because here, mouse rules apply!

Keep checking the Disney Parks Blog for more coverage on the opening of Mickey & Minnie’s Runaway Railway next week.  In the meantime, be sure to check out the “Wonders of the Deep” short for a look inside an amazing cartoon universe you’ll be able to enjoy at Disney’s Hollywood Studios beginning March 4, 2020 and later at Disneyland park in 2022.