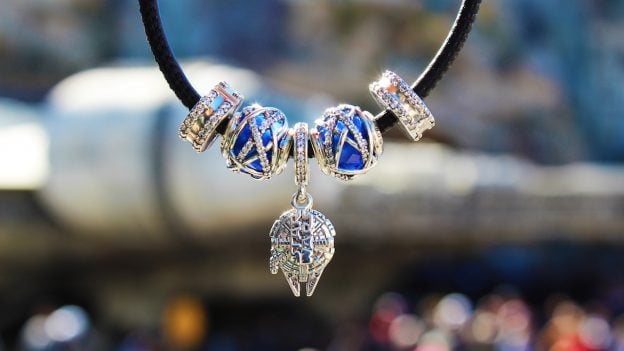 Travel to a Galaxy Far, Far Away with Pandora Jewelry’s Latest Charm Launch

I always love sharing news about Pandora charm launches with blog readers, but it’s even more exciting when the charm is inspired by one of my favorite film franchise! On February 5, Pandora is releasing a new charm featuring the iconic ship that made the Kessel Run in less than twelve parsecs – the Disney Parks Star Wars Millennium Falcon Dangle Charm. The double-dangle charm features a beautifully intricate design of the legendary Millennium Falcon with a cubic zirconia on the bezel.

This galactic charm is the perfect keepsake to commemorate your visit to Star Wars: Galaxy’s Edge and your journey on Millennium Falcon: Smugglers Run.

The charm launches first for Disney Parks guests on February 5 at the following in-park locations: Legends of Hollywood in Disney’s Hollywood Studios, La Mascarade d’Orleans in Disneyland park, and New Century Jewelers in the Emporium at Disneyland Park. On February 7, the charm can be found at participating Pandora Jewelry locations at Walt Disney World Resort and Disneyland Resort as well as on shopDisney.com. On March 5, the charm will become available at the Pandora Disney Springs store.

I don’t know about you but I have a GOOD feeling about this!