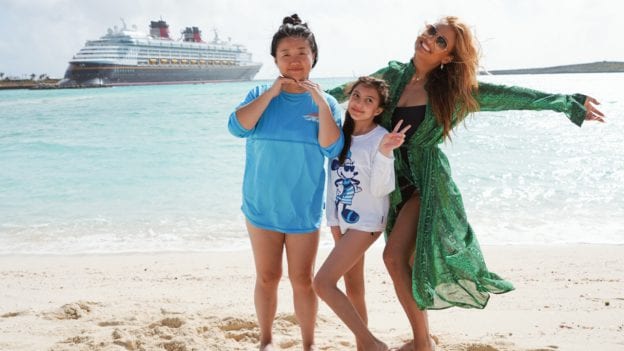 Sherry Cola from Freeform’s ‘Good Trouble’ and Elle Paris Legaspi from Freeform’s “Party of Five” took a break from shooting their TV shows to embark on a Disney Cruise Line sailing out of Miami to the Caribbean aboard the Disney Magic! To join them on all the fun, Radio Disney sent social media superstar, Montana Tucker. Together the group lived the #DisneyCruiseLife enjoying enchanting entertainment and Disney’s Private Island Castaway Cay plus one heroic Marvel Day at Sea. It was a week full of excitement and relaxation.

Their Disney Cruise vacation began with Mickey’s Sail-A-Wave Deck Party. Sherry, Elle, and Montana danced along with their favorite Disney Characters and waved goodbye to the Miami skyline.

The next day the Disney Magic underwent a heroic transformation for Marvel Day at Sea. Mighty encounters were around every corner where Sherry, Elle, and Montana met some of their favorite heroes including Spider-Man, Black Panther, Iron Man, and Groot! Later that day Montana jived to songs from the 1930’s & 40’s at the Star-Spangled USO Show salute to Captain America while Sherry and Elle got mystical with Doctor Strange’s Journey into the Mystic Arts. That night, the whole group gathered on the top deck for an explosive and unforgettable event, the Marvel Heroes Unite Deck Show. It was an epic battle between good and evil as only Marvel could deliver. To end the day, Sherry Cola “shook her groove thing” to the most awesome retro tunes at the Ravagers Club featuring the Guardians of the Galaxy, an adult-exclusive party.

The next two days were filled a ton of fun in the sun! Aboard the Disney Magic, Sherry and Elle climbed to the highest point of the ship to plunge 3 stories down the AquaDunk body slide. Shoreside, on Castaway Cay, the pair went snorkeling for the very first time where they were lucky enough to spot a stingray! Meanwhile, Montana grabbed a delicious frozen drink at Olaf’s Summertime Freeze before getting on an Aqua Trike to tread the crystal-blue waters.

On their second to last day, Sherry, Elle, and Montana were invited to a special rehearsal inside the Walt Disney Theater alongside the cast members of the Disney Magic’s Broadway-caliber shows.  They got a special sneak peek at what it takes to perform aboard the ship and even learned a few dance steps! Sherry next spent the afternoon at Senses Spa while Elle and Montana relaxed poolside. That evening, they all got the royal treatment at Rapunzel’s Royal Table restaurant, one of the ship’s themed dining experiences inspired by Disney’s hit animated movie Tangled!

For Sherry, Elle, and Montana it was an unforgettable week filled with memories that will last a lifetime!

Don’t forget to watch the season finales of “Good Trouble” and “Party of Five” March 4, 2020, on Freeform; also streaming on Hulu!

Listen to internet radio at RadioDisney.com!