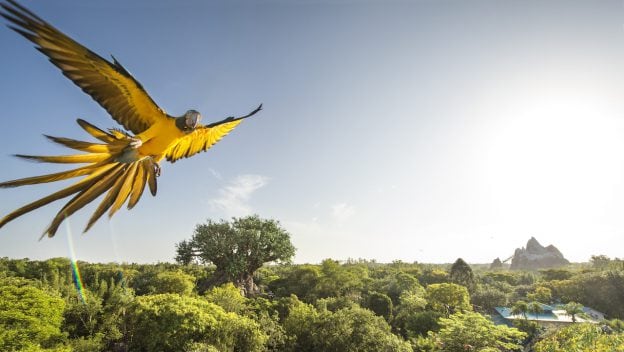 #DisneyMagicMoments: Behind the Camera – A Game of Duck, Duck … Macaw at Disney’s Animal Kingdom

Earth Day is very important to Disney’s Animal Kingdom and our entire company, so I’m especially pleased today to share this photo of a blue-throated macaw I captured at the park several years ago. The presence of this critically endangered species at Disney’s Animal Kingdom is part of the conservation work happening at the park every day, which continues even during these unprecedented times. This is one of my all-time favorite photos I’ve taken as a Disney photographer, showcasing the #DisneyMagicofNature.

Back in 2014, Disney’s Animal Kingdom was preparing to unveil “Animal Encounters: Winged Encounters – The Kingdom Takes Flight,” featuring free-flying macaws. The “pandemonium of parrots” is breathtaking to watch in the skies over Discovery Island, and required intensive preparation to bring it to reality.

The team consisted of trainers and handlers with a deep love and understanding of birds, plenty of patience and positive reinforcement … and oodles of bird treats! They worked tirelessly with the macaws, teaching them to circle above the park during the show and then return to their trainers when the demonstration ended.

Part of the training process involved stationing tall mechanical lifts around the park; attached to these lifts were baskets for trainers to stand in, with wooden perches affixed to the baskets where the birds could land. The trainers – plenty of treats in hand – climbed into the baskets and were raised above the treetops at Disney’s Animal Kingdom, using the treats as positive reinforcement to acclimate the birds to flying a circular route around the park. The macaws flew from lift to lift, alighting ever so briefly on the perches to collect a treat before zipping off to the next trainer.

To help the park promote this amazing new offering, I was invited inside one of the lift baskets during a training session, hoping to snap a photo of a bird in flight with the iconic Tree of Life and majestic Expedition Everest as a backdrop. There was only one catch: As the birds flew up to the perch, I had to quickly duck down into the basket so I didn’t distract them. Now, I’m well over six feet tall, the basket is only about three feet wide and six feet long, and there’s another person in there with me. Not a whole lot of space to maneuver! But there I was, about seven stories above Disney’s Animal Kingdom, wearing a hard hat and full safety equipment while holding a camera and simultaneously hiding from and taking pictures of fast-moving macaws. From the ground I must have looked like a construction worker with a paralyzing fear of birds.

After several unsuccessful attempts, I started to find a rhythm. As the birds flew toward the perch, I framed up a shot where I hoped the macaw might eventually be, then braced the camera against the rim of the basket, ducked down to hide from the bird and blindly clicked the shutter as it landed. It took a couple of mornings up in that basket to fine-tune the process and hope for just the right moment, but I eventually snagged the photo you see here of a beautiful blue-throated macaw flaring its wings as it prepared to land. All in a day’s work for a Disney photographer.

I hope you’ve enjoyed this little piece of magic from my Disney career. Keep checking back here on the Disney Parks Blog for more #DisneyMagicMoments.

Likes (22)
Share #DisneyMagicMoments: Behind the Camera – A Game of Duck, Duck … Macaw at Disney’s Animal Kingdom