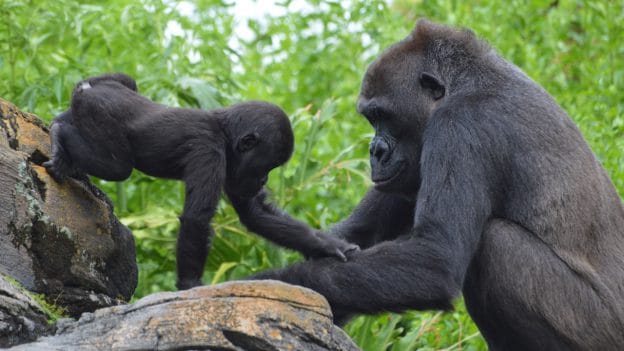 Every mom cherishes her child’s first birthday, so with Mother’s Day approaching this weekend our team at Disney’s Animal Kingdom would like to share a recent celebration we held for Grace, a beautiful western lowland gorilla.

It was just over a year ago now that Grace was born at Disney’s Animal Kingdom. And while the park is temporarily closed, our team was able to throw her a special princess-themed birthday party!

The team created a cardboard princess carriage attached to plastic horses by paper chains for Grace and her family to play with. There was also a cardboard castle and colorful piñata. The materials we used in the decorations are enrichment items we give the gorillas as a special treat – perfect for a birthday surprise!

Grace’s birthday “cake” was made of three layers of ice treats – blocks of ice with berries and currants for the gorillas to pick out as the ice melts. We also froze pureed sweet potatoes and kiwis and cut them into shapes for another birthday surprise.

Grace was born May 1, 2019, at Disney’s Animal Kingdom to mother Kashata and father Gino, who were selected to breed as part of the Species Survival Plan overseen by the Association of Zoos and Aquariums. The plan ensures responsible breeding of endangered species so they will have healthy, genetically diverse populations for years to come.

Grace is named after the Gorilla Rehabilitation and Conservation Education Center (GRACE), a gorilla sanctuary in the Democratic Republic of Congo, which is dedicated to helping gorillas orphaned by poaching. Our animal care experts at Disney’s Animal Kingdom have spent more than a decade helping the GRACE team and local community rehabilitate orphan gorillas and protect the species in the wild.

We’re thrilled to watch Grace every day as she matures and develops magnificent new skills. She likes walking upright and hanging upside down, for example. She’s also very energetic, inquisitive and social, and loves to play – especially with her three older siblings.

It was a wonderful time celebrating Grace’s big day, and we’re looking forward to the time you can come see her and her family again on the Gorilla Falls Exploration Trail here at Disney’s Animal Kingdom!