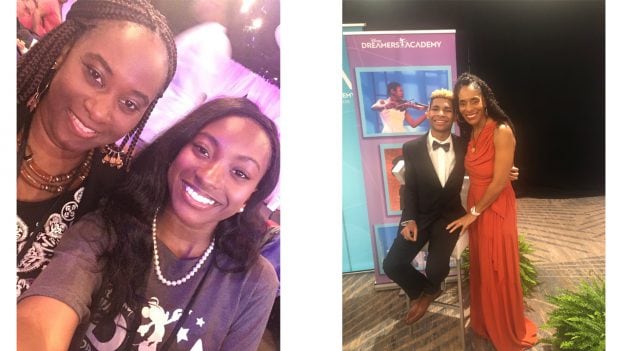 On Mother’s Day, Disney Dreamers Academy Alumni Give Thanks to Their Moms

Mother’s Day is always a special occasion for Disney Dreamers Academy alumni Casey Carter of Columbia, South Carolina, and Anthony Juba-Richardson of Montverde, Florida.  Their close bonds with their mothers has been instrumental in their success stories.

No Challenge Too Big

As soon as Casey, a 2018 Disney Dreamer Academy participant, was born she faced big obstacles. Three months premature, she immediately dealt with serious medical issues.  As she achieved positive milestones during her infancy, Tara knew Casey was born with a fighting spirit.

Tara fostered that spirt, ensuring Casey never felt she had any limitations on what she could achieve.

So, years later, it was no surprise to Tara when Casey presented her with an ambitious high school science fair project idea. Casey wanted to tackle one of sport’s most prevailing health issues – concussions in football players.  Tara committed to provide Casey whatever she needed to make the project a success.

With Tara’s support, Casey’s project won numerous national awards. She is now filing patents for the device she developed with the hopes of helping football players across the country.

“We are a mother and a daughter, but she’s also my best friend,” said Tara. “Casey is one of the most honest, compassionate, creative and intelligent people. You couldn’t ask for a better human being.”

Teaming Up to Help Others

The moment caught him by surprise, but not his mother, Donar Juba-Johnson.

Since he was a child, Donar nurtured Anthony’s giving spirit and witnessed the impact it had on others.

As a teen, Anthony was inspired to help the elderly and went to Donar with an idea. Together they made and donated blankets to nursing homes, and when Anthony realized he could use his musical talents to help dementia patients, they incorporated this unique aspect into their mission. Ultimately, they co-founded the non-profit organization, One Beat Away, where they do everything as a team.

After Disney Dreamers Academy, they were inspired to dream even bigger, and formalized their charity and ramped up fundraising.

“I wanted my children to grow up in a world knowing that it’s not just about them,” said Donar. “The work they do matters. Even if one life is changed, that’s all that really matters.”

Disney Dreamers Academy with Steve Harvey and ESSENCE is a four-day, transformational mentoring program for 100 teens that takes place annually at Walt Disney World Resort in Florida.  Teens are encouraged to “Be100”, to be positive and “all in,” and to pursue their dreams and make a difference in the lives of others.

Likes (0)
3 Comments
Share On Mother’s Day, Disney Dreamers Academy Alumni Give Thanks to Their Moms