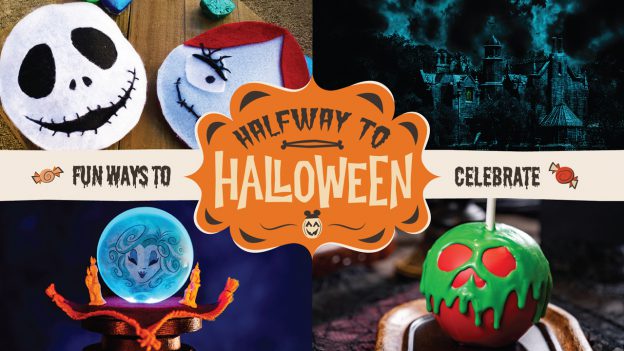 As part of our #Halfway2Halloween takeover at Disney Parks, we’re digging up five favorite ways to have some spook-tacular fun at home! Whether it’s a delightfully ghoulish DIY project, a creepily creative candy apple or a not-so-scary digital wallpaper for your device, check out our list of Disney surprises:

1 – Make One of These Not-So-Scary DIY projects

Our first way to celebrate #Halfway2Halloween is with a bewitchingly wondrous series of DIY projects.

2 – Harken Back to Halloween Past

Celebrate #Halfway2Halloween with a fascinating look at the history of Halloween at Disney Parks.

3 – Learn Something New about The Haunted Mansion

One of our favorite attractions is The Haunted Mansion, so add to the #Halfway2Halloween fun with these facts:

Plus, we’d like to introduce you to 13 of the attraction’s residents at Disneyland Resort.

Also, you can choose from a variety of Halloween candy apple tutorials to celebrate #Halfway2Halloween. Each of these apples are coated with delicious candies, colored sugar and more.

5 – Add some Spooky fun to Your Devices

For #Halfway2Halloween, you must also dig into our dozens of spooky Disney Parks Blog wallpapers and customize your desktop and mobile devices with Disney magic. Click on your favorite wallpaper above to download, or head to our wallpaper page and search for “Halloween” for a variety of designs and sizes!

And we have an extra bonus way to have fun with your #Halfway2Halloween festivities –  check out this Disney+ watch list of top not-so-scary favorites:

Plus, don’t miss this musical Halloween Special, “Disney Hall of Villains,” from our friends at Disney Channel and Radio Disney. And for more halloween fun check out Freeform’s 31 Nights of Halloween Instagram account.