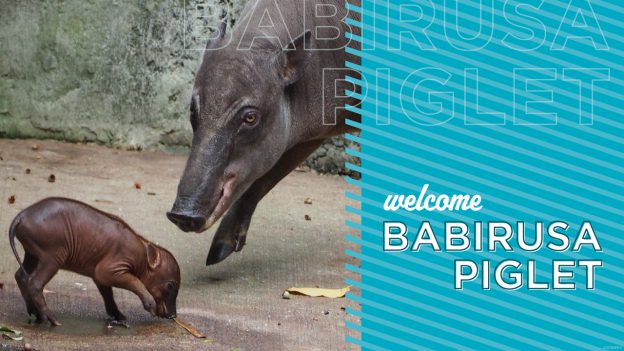 We are squealing with delight! Disney’s Animal Kingdom is celebrating a first for the park: the birth of a babirusa piglet. And, it’s a girl! Our Disney animal care team has chosen to name her Kirana, which translates to “sunbeam” in Indonesian.

Babirusas are part of the hog family, native to the swamps and rainforests of the Indonesian Islands. They’re known for their unique snouts and magnificent tusks that can grow up to almost 17 inches! Close relatives of the babirusa also live at Disney’s Animal Kingdom, such as the warthogs on Kilimanjaro Safaris and the KuneKune pigs at Affection Section.

This birth is another success story for our dedicated team of Disney animal care experts, as parents Betty and Mentari were chosen to breed through the Species Survival Plan (SSP) overseen by the Association of Zoos and Aquariums. The SSP assures responsible breeding for endangered species, such as the babirusa pigs and Asha, the Hartmann’s Mountain zebra foal recently born at Disney’s Animal Kingdom.

Over the last 15 years, Disney animal care experts partnered with reproductive biologists and the SSP to “crack the code” on breeding a babirusa pair. The piglet is making an important contribution toward the worldwide conservation and understanding of the species, which will help ensure a future generation for these vulnerable animals.

The Disney Conservation Fund has supported projects in Africa for more than 20 years to inspire grassroots conservation and improve livelihoods. These projects can help protect Africa’s amazing wildlife and benefit the hogs – such as babirusas – living in these habitats.

The piglet is healthy and bonding with mom inside their den at the park. To learn more about hogs, visit DisneyAnimals.com.