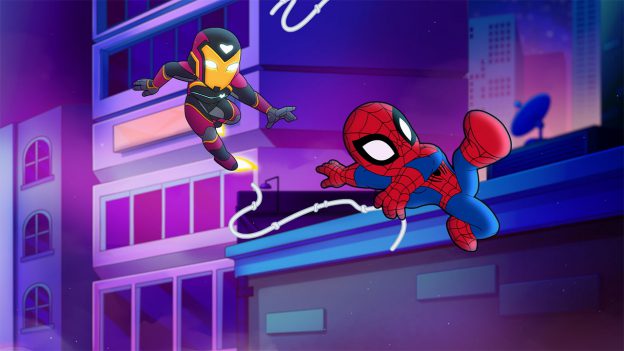 To celebrate the new season of Marvel Super Hero Adventures – the first five episodes available now on Marvel HQ – kids can customize their favorite Marvel heroes with an action-packed coloring collection inspired by the series. Free coloring sheets are available for download below.

Get a sneak preview of the episodes available on Marvel HQ.

Spidey swings into his arc-powered pal, Ironheart, as the entire city loses electricity! With Ironheart’s suit shorting out too, these amazing friends will need to find a creative solution together.

Marvel Super Hero Adventures “Aww… Do I Have To?”

When Hulk has his super-strength stolen by the maniacally magical Morgan Le Fay, he and Spidey are forced to think outside-the-box and remember that an open mind is a great tool for saving the day!

Spidey and Captain America learn a thing or two about responsibility when Cap decides to leave his new Victory Bike unlocked, only for it to get hijacked by the belligerent cyborg-space-bunny Blackjack!

Mr. Fantastic and Spidey are building a brand-new Web-Jet when they’re visited by Mittens the cat. Spidey promises Mr. Fantastic that he’ll put Mittens outside but doesn’t keep his promise, leading to catastrophic kitten chaos!

Diamonds are being stolen one-by-one from the jewelry store, so Spidey partners up with The Invisible Woman, aka Sue Storm, to solve the mystery! Who could it BEE?