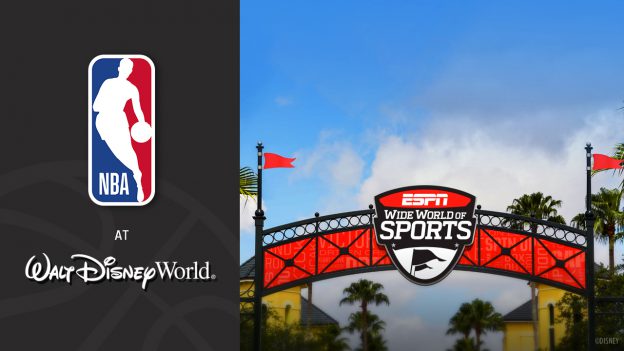 Walt Disney World Resort is about to become the center of the pro basketball world this summer. We are excited to share that the National Basketball Association officially announced today it will finish its 2019-20 season at Walt Disney World Resort. The season, which was interrupted by the pandemic, will resume in July with team practices and games played at ESPN Wide World of Sports Complex in the Arena, HP Field House and Visa Athletic Center.

Game play will resume on July 30 with 22 teams (the eight teams in each conference with the highest current winning percentages and the six teams currently within six games of the eighth seed in either conference) competing to determine seeding for the NBA Playoffs. The playoffs will feature 16 teams and the NBA Finals will end no later than October 13 at ESPN Wide World of Sports Complex.

Based on current league guidelines which were developed in consultation with public health experts and government officials, all games will be held without spectators. Walt Disney World Resort and ESPN Wide World of Sports Complex are thrilled to continue the long-standing relationship with the NBA, which includes the first-of-its-kind entertainment venue, NBA Experience, at Disney Springs.

For more information about the resumption of the 2019-20 NBA season, including details on the competition format, visit www.NBA.com.