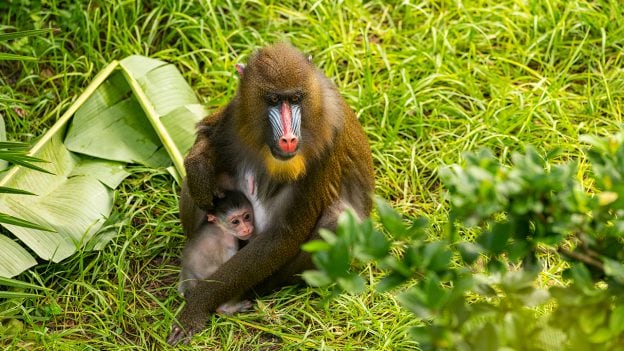 UPDATE – Aug. 5, 2020
Introducing… Olive! She’s been clinging so close to her mom since her birth on July 25 so it took a few days for the animal care team to determine the baby mandrill is a girl! Cast Members chose to name the infant Olive to fit in with the rest of her colorful family, including mom, Scarlett and sister, Hazel. You can see the whole mandrill troop on Kilimanjaro Safaris at Disney’s Animal Kingdom. Stay tuned to the Disney Parks Blog and be sure to check out @DrMarkAtDisney on Instagram for more baby animal updates.

It’s been an exciting couple of weeks during the phased reopening of Walt Disney World as we’ve welcomed Guests back to our parks and resorts. This weekend, our animal care team at Disney’s Animal Kingdom Theme Park got to welcome a “colorful” addition to the animal family, too! On Saturday, July 25, a mandrill infant was born to first-time father, Linus, and mother, Scarlett.

Mom and baby are doing well and spending lots of time bonding. In fact, their bond is so close that at the baby’s neonatal exam, our veterinary team wasn’t able to determine if the baby is a boy or a girl just yet, because mom is keeping the infant so close to her belly. Scarlett and baby have already begun making short appearances in their habitat on the Kilimanjaro Safari, joining the other members of their mandrill troop. As soon as we determine the gender and name, I’ll share on my Instagram, @drmarkatdisney, so stay tuned there!

While this little one is pretty tiny now, mandrills are actually the largest species of monkey in the world. They’re a vulnerable species found in African rainforests along the equator, where their habitat is disappearing because of deforestation and poaching. This birth is an example of how our dedicated and highly trained team of Disney animal care experts works with the Association of Zoos and Aquariums (AZA) on Species Survival Plans (SSPs). The SSP assures responsible breeding for endangered species, such as mandrill monkeys, allowing for a healthy and genetically diverse population of such animals for years to come. Just this past May, we welcomed an adorable babirusa piglet, yet another success story of breeding through the SSP.

The exciting news from Animals, Science and Environment doesn’t stop there. In case you missed it, last week we announced an upcoming Disney+ series called “The Magic of Disney’s Animal Kingdom” where you’ll get a peek behind-the-scenes as the stories of these animal care experts and the animals they care for come to life this fall on Disney+. In fact, you might even see some of our mandrills in one of the episodes.

From National Geographic, the global leader in natural-history programming, and premiering on Disney+, this new series will give viewers a one-of-a-kind look into the daily operation of our advanced animal care and veterinary facilities at Disney’s Animal Kingdom Theme Park and The Seas with Nemo & Friends at EPCOT and will showcase the dedication and expertise of our amazing cast members.

Stay tuned for more about “The Magic of Disney’s Animal Kingdom,” coming to Disney+ this fall!