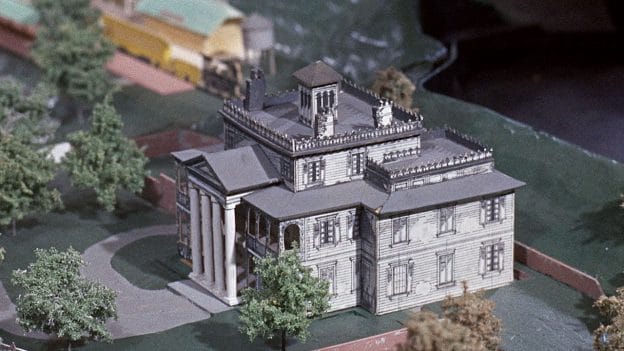 #DisneyMagicMoments: Travel Back with Disney Legend Rolly Crump for a Feeling of Foreboding at the Disneyland Resort Haunted Mansion

Is this haunted room actually stretching? Or is it your imagination?

Long before the Haunted Mansion was inhabited by a lively collection of 999 happy haunts, Disney Imagineers began materializing ideas for the attraction during the initial planning of Disneyland park. Disney Legend Rolly Crump joined an Imagineering design team working on early concepts for the attraction about 10 years before the doors of the Haunted Mansion creaked open in August 1969.

After Imagineers created new technologies for the 1964-65 New York World’s Fair, and the exterior of the Haunted Mansion was built, Rolly contributed hundreds of sketches he’d previously created for the attraction. These early sketches helped with the design of the attraction as we know it today, which is neither too scary nor too light-hearted.

Rolly recounts the beginnings of the Haunted Mansion in this video celebrating the attraction’s 51st anniversary. He will be your ghost host for rarely heard stories behind this classic attraction that is filled with stunning special effects, haunting show sets and ethereal music!

If you are looking for Haunted Mansion-inspired gear, the all-new Disney Parks Haunted Mansion Collection features a variety of products from a new spirit jersey, two new bags by Loungefly, a tie-back blouse by Her Universe and cloth face mask all inspired by the most spirited attraction! Coming this month to Walt Disney World Resort, Downtown Disney District at Disneyland Resort and online at shopDisney.com.

Likes (5)
Share #DisneyMagicMoments: Travel Back with Disney Legend Rolly Crump for a Feeling of Foreboding at the Disneyland Resort Haunted Mansion