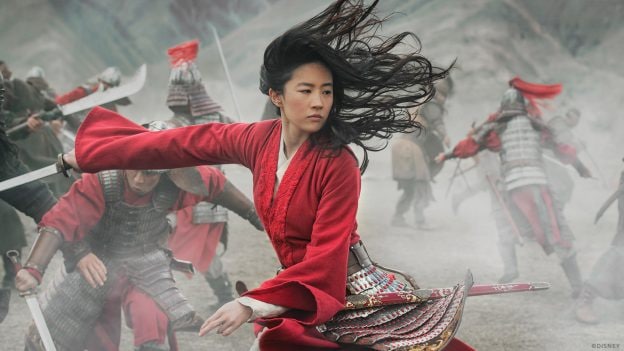 For a limited time beginning August 21, guests visiting Disney’s Hollywood Studios will get an early glimpse of scenes from Disney’s epic new adventure, “Mulan,” when a sneak peek of the film opens as part of the Walt Disney Presents attraction. As part of this experience, you’ll also be able to see a display featuring an original witch costume used in the production of the film, along with an authentic replica of a warrior costume and sword.

Acclaimed filmmaker Niki Caro brings the epic tale of China’s legendary warrior to life in Disney’s “Mulan,” in which a fearless young woman risks everything out of love for her family and her country to become one of the greatest warriors China has ever known. When the Emperor of China issues a decree that one man per family must serve in the Imperial Army to defend the country from Northern invaders, Hua Mulan, the eldest daughter of an honored warrior, steps in to take the place of her ailing father. Masquerading as a man, Hua Jun, she is tested every step of the way and must harness her inner strength and embrace her true potential. It is an epic journey that will transform her into an honored warrior and earn her the respect of a grateful nation… and a proud father.

Here’s a look at the latest trailer for “Mulan.”

“A beautiful Activity Packet, inspired by the film and created in partnership with Disney’s Animals, Science and Environment team, is also available. Download and print,” your copy now to enhance your experience with “Mulan.”

You can start streaming “Mulan” September 4, exclusively on Disney+ with Premier Access.