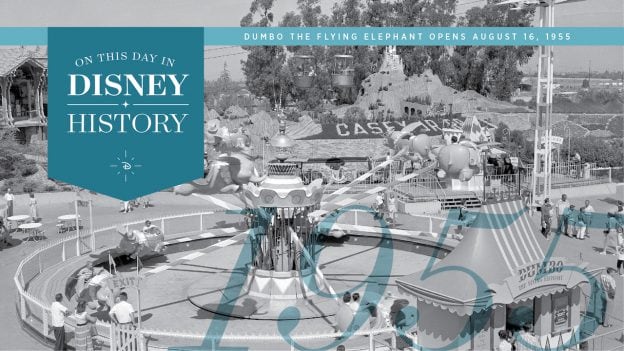 65 years ago, a Disneyland icon was unveiled as Dumbo the Flying Elephant took to the sky in Fantasyland. Featuring characters from Walt Disney’s 1941 classic animated film, “Dumbo,” this high-soaring adventure brings us into Dumbo’s circus world. Special details can be found within the attraction, including an antique band organ, located under the circus tent just behind the flyers. In the center of the “ring,” Dumbo’s faithful friend, Timothy Q. Mouse, directs the action with help from his “magic” feather.

Guests have clamored to take wing with their favorite elephant over the years; indeed, boarding for a first spin on Dumbo the Flying Elephant has become a rite of passage for Disneyland park’s youngest visitors.

As part of the Fantasyland remodel in 1983, Dumbo the Flying Elephant moved from the west side of Fantasyland to its current location, formerly the home of Skull Rock Cove. Another enhancement occurred in 1990, when six elephants were added to the attraction, for a current total of 16 vibrant pachyderms. In 2005, on the occasion of Disneyland’s 50th anniversary, an elephant from the ride was donated to the Smithsonian National Museum in Washington, D.C.

The popularity of these colorful flying elephants has proved so enduring, they now fly in six Disney parks around the world. Dumbo’s endearing ability to believe in himself and glide into the skies reminds guests everywhere if you believe in yourself, anything is possible!