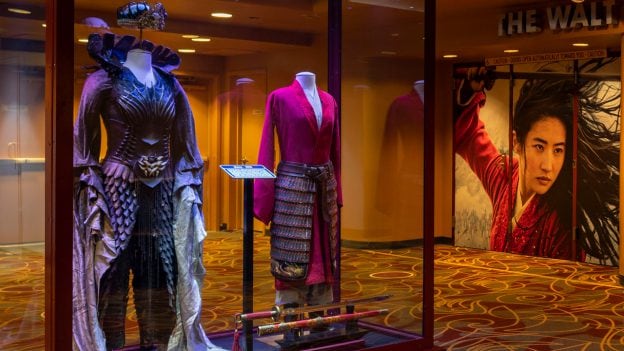 A Look Behind the Scenes of Disney’s ‘Mulan’

For a limited time at Disney’s Hollywood Studios, costumes and props are on display from Disney’s “Mulan” that debuts on Disney+ with Premier Access this Friday.  These costumes are truly a work of art and are just one example of the incredible production design behind this new film.

Inspired by the Chinese “Ballad of Mulan,” the film brings audiences an incredible tale that celebrates the richness of Chinese culture and the power of female strength. A story that is Chinese yet transcends borders, “Mulan” reflects the breadth and depth of Chinese identity. A combination of relatable emotions with awe-inspiring action sequences and breathtaking visuals, “Mulan” is a movie with universal appeal that embodies the timeless themes of honor, family, respect for elders and duty.

Filmmakers drew their inspirations for the design from a number of Chinese dynasties, including many elements from the Tang dynasty, which ruled China from 618 to 907. Colors, texture, and shapes all play key parts in the story and look of the film.

In total 40 people worked on the costumes over three months. Between three and five costumes were made for the 50 main actors, with over 1,000 costumes made in total. Fabrics were custom dyed and accented with hand embroidery and stitching adding to the authenticity.

The costumes for Xianniang, a witch played by Gong Li, were among the most time-consuming and challenging to design. Take a look:

For Mulan, played by Yifei Liu, Weta Workshop in New Zealand produced several types of armor, including beauty hero armor, made from different fabrics and different structures that were appropriate for different uses.  Red was chosen as an iconic color representing both fire and joy in China. And engraved along the base of a sword belonging to Mulan’s father are the Chinese characters signifying “Loyal Brave True.” Here’s a look at the inspiration behind Mulan’s costume design:

Be sure to stop by and see both the Mulan and Xianniang costumes up close while on display along with an exclusive Sneak Peek at Walt Disney Presents and don’t miss “Mulan” streaming exclusively on Disney+ with Premier Access starting this Friday. For more info, visit http://disneyplus.com/mulan. And journey along with Mulan at home, leveraging your talents and discovering what makes you legendary with the “Mulan” Activity Packet.