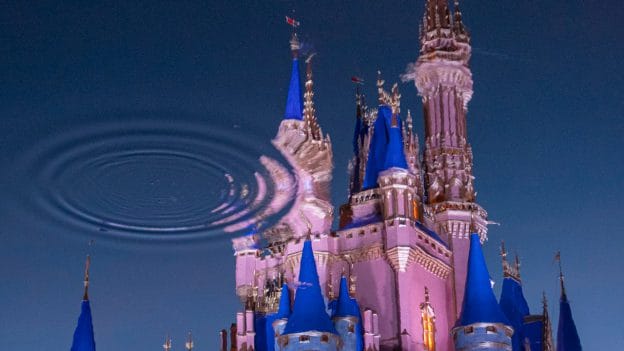 A few weeks ago, I shared a photo I’d just taken of Cinderella Castle with my friend Zach Riddley from Walt Disney Imagineering. You may have seen it on his Instagram page, and I thought you might enjoy learning a bit more about how I captured this cool image.

Disney photographer David Roark sent this photo to me and I had to share this unique perspective of Cinderella Castle at @waltdisneyworld. He captured this photo in the moat’s reflection while crossing the bridge to Liberty Square. I love this photo because it has two stories depending on if you look at it this way or flip it upside down. What’s your favorite view of the castle?✨ #waltdisneyworld #magickingdom #cinderellacastle

I was in Magic Kingdom Park early one morning before dawn. My official project that day was to take photos of Cinderella Castle’s new royal color scheme at sunrise. It’s so much easier these days to set up for these types of shots, since I have an app on my phone that tells me exactly where the sun will break the horizon; I used to have to look it up ahead of time and draw a line on a map to figure out approximately where to stand. Now I just show up and turn on my phone…magic!

My app that morning told me the ideal location would be somewhere along the bridge that heads into Liberty Square. As I was walking along the bridge searching for my specific spot, I happened to look down and see the castle reflected just perfectly in the water of its moat, with an amazing pre-dawn sky behind it. We call this the “magic hour,” when the sky just starts to brighten but before full sunlight – it only lasts for a few minutes each day. Even though I wasn’t at the park for this particular shot, the opportunity was just too great to pass up.

The water was so still that morning, though, I knew if I took the photo as-is, you may not be able to tell it was actually a reflection. I needed to find something I could toss in the water to make it ripple, and managed to scavenge just three acorns from under the oak trees that line the bridge. On my third and last toss, the acorn landed in the exact position I wanted and I snapped the photo you see here.

OK, well…not exactly the photo you see here. Because it’s a reflection, I wanted to pull a little trick and make the castle appear to be “right side up,” as if you were looking at it for real. So I flipped the image horizontally and then rotated it 180 degrees. That’s why the little patch of green in the lower right may confuse you – that’s the grassy lawn on the edge of the moat. Turn the photo upside down again and it will all make sense!