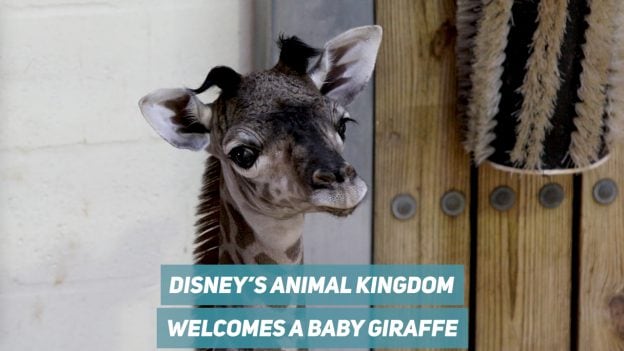 To say we’re excited at Disney’s Animal Kingdom Theme Park is putting it lightly  – we are over the moon ecstatic about the premiere of “Magic of Disney’s Animal Kingdom”  from National Geographic, streaming today on Disney+. I know you are going to love getting to see the exclusive, behind-the-scenes look at what goes into caring for the 5,000+ animals who call Walt Disney World Resort home.

What better way to celebrate a new show…than with a new addition.

I’m thrilled to share news that in the wee hours of Tuesday, Sept. 22, a baby female Masai giraffe was born backstage at Disney’s Animal Kingdom Theme Park. Weighing in at 156 pounds, she is healthy, actively nursing and was strong and feisty during her neonatal exam. Our girl, yet-to-be-named, is already showing she has a close bond with her mom Mara. The pair will continue to stay backstage until baby meets all her developmental milestones. We expect her to join the herd on the savanna in the coming weeks.

This baby’s spirited personality runs in the family. In Episode 1 of “Magic of Disney’s Animal Kingdom,” you’ll meet her grandma, Kenya, who bravely participates in a voluntary hoof trimming procedure. And you may recall seeing her mom Mara before. She made headlines in January 2019 when she gave birth to her first calf Jabari on Harambe Wildlife Reserve within the Kilimanjaro Safaris.

This birth marks the second successful pairing of Mara and the calf’s dad George through the Species Survival Plan (SSP), which ensures the responsible breeding of endangered species.

So much to stay tuned for… new episodes of “Magic of Disney’s Animal Kingdom” on Disney+ every Friday through mid-November… and more milestone moments with our newest giraffe calf. Follow along here and at @drmarkatdisney on Instagram and @DisneyASE on Facebook for more, and check out this family-friendly activity page for this week’s episode.