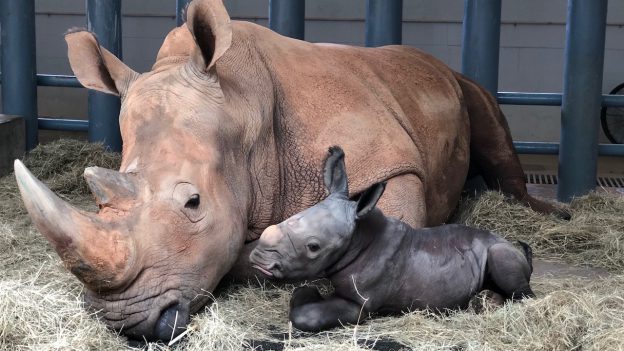 #DisneyMagicMoments: It’s the Circle of Life as a Rhino Gives Birth at Disney’s Animal Kingdom

Rhinoceros may be the world’s second largest land animal, but I’m happy to announce we have a tiny new one at Disney’s Animal Kingdom Theme Park! Early this morning, our beloved Kendi gave birth to a beautiful baby boy white rhino.

Typically, a rhino calf can weigh up to 140 pounds at birth, and as expected, this baby was nursing, standing and walking around right by mom within the first hour of being born. The two will spend the next several weeks bonding backstage before joining the rest of the herd.

Kendi was paired with dad Dugan through one of the Species Survival Plans, which are overseen by the Association of Zoos and Aquariums to ensure the responsible breeding of endangered species. White rhinos are an endangered species with a near-threatened status. Some of their adventures in pairing will be featured in an upcoming episode of the “Magic of Disney’s Animal Kingdom” series now streaming on Disney+.

This is the first of several rhino births on the horizon. Two other rhinos at the park are also expecting; Jao is due fall 2021, and Lola will likely give birth in fall/winter 2021.

Be sure to keep checking back with us here on the Disney Parks Blog as we continue to chronicle these magical rhino births!