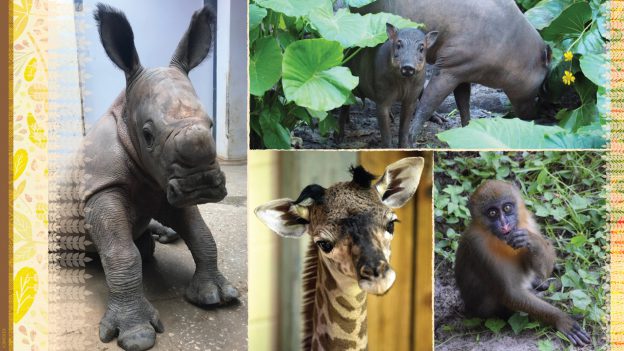 Thanksgiving is a day of gratitude. At Walt Disney World Resort, among the many things we’re thankful for are the 3,000 animal births and hatchings that happened in 2020, including more than 2,500 invertebrates (such as insects and snails). From the tiniest of snails (more than 1,000 to be exact) to charismatic mammals such as a 150-pound endangered white rhinoceros, we have an abundance of thankfulness this year.

Births and hatchings are exciting for our devoted Disney’s Animals, Science and Environment team, and for our theme park guests who can see these new additions up close and personal in their habitats. I am especially proud knowing many of these new residents offer hope for the future of their respective species. Each represents another success of the Association of Zoos and Aquariums’ Species Survival Plans.

I am so proud and thankful for the entire team that makes it all happen. So, during this Thanksgiving season, let’s reflect on the miracle of birth and the magic of nature with a look at some of the adorable baby animals that joined our Disney family this year.

The newest addition to the Disney’s Animal Kingdom family, born Oct 25, is our male white rhinoceros, (one of the many births through one of the Species Survival Plans.) This yet-to-be-named little one is already weighing in at more than 200 pounds and is quite a ball of energy. You may remember his mom and dad, Kendi and Dugan, whose love story we followed on “Magic of Disney’s Animal Kingdom,” a Disney+ original series streaming now. We expect him to join the rest of the crash on the Kilimanjaro Safaris savanna at Disney’s Animal Kingdom Theme Park early next year.

You’re not seeing double – we had two female Masai giraffe born only a month apart this year. Maple (left) got her name after her keepers noticed that one of the spots on her skin is shaped like a maple leaf. And Zella (right) has a name that means “beautiful girl who knows the path” in Slavic and African languages. Both little girls will make their debut on the savanna any day now.

A first for our team, the baby Babirusa, Kirana, which translates to “Sunbeam” in Indonesian, can be seen daily in the Oasis at the park. This time last year, the team was hard at work introducing Betty and Mentari, parents of little Kirana, while cameras rolled for “Magic of Disney’s Animal Kingdom.

We’ve had more than 1,000 Partula Snails this year! These little ones actually produce one offspring every 4-6 weeks and can reproduce without a partner. The baby reaches maturity between three and six months and can start producing their own offspring. That’s a lot of snails!

Over at The Seas with Nemo & Friends at EPCOT, the team cares for a variety of aquatic animals including these little Banggai cardinalfish. These animals are fully grown at just 3 inches. And did you know, the male Banggai are actually the ones who carry the eggs in their mouth until they hatch! They can usually hold about 60 eggs at once.

And who can forget Olive, the littlest mandrill in the troop. She stole the hearts of many as she tried a blueberry for the first time in September. Her keepers say she’s becoming much more independent from mom, Scarlet, routinely climbing in the trees solo or exploring more and more on her own. She has also found a willing playmate in her grandmother, Snow.

You can learn more about the rare and beautiful animals that call Disney home and meet the amazing teams who care for them by watching National Geographic’s “Magic of Disney’s Animal Kingdom.” The Disney+ original series is streaming now. To learn more about the animals in our care and what we’re doing to save their counterparts in the wild, visit DisneyAnimals.com.