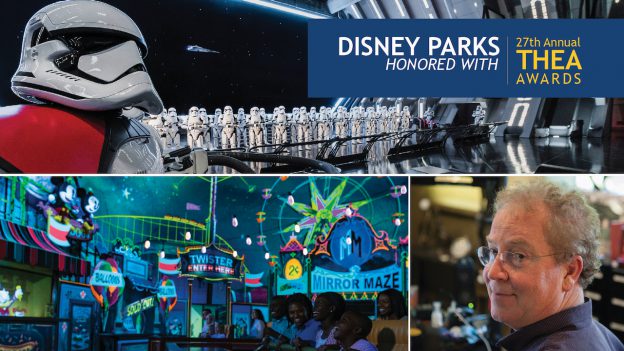 Earlier today the Themed Entertainment Association (TEA) honored two of Disney’s newest attractions with Thea Awards for Outstanding Achievement – Star Wars: Rise of the Resistance at both Disneyland and Walt Disney World resorts and Mickey & Minnie’s Runaway Railway at Walt Disney World Resort. The Thea Awards are regarded by many as one of the top awards given in the themed entertainment industry.

Star Wars: Rise of the Resistance, which opened in December at Disney’s Hollywood Studios and in January at Disneyland Park, takes immersive experiences to an entirely new level. The attraction uses multiple ride systems, the latest Audio-Animatronics technology and stunning visual effects to transport guests off the planet Batuu and onto a First Order Star Destroyer, where guests attempt a harrowing escape from the evil Kylo Ren. TEA calls the attraction “the most technologically advanced theme park attraction in existence today… The entire attraction, from front to back, is one massive magic trick that leaves riders gobsmacked and represents the absolute pinnacle of how our industry can entertain an audience at a theme park.”

Mickey & Minnie’s Runaway Railway, which opened at Disney’s Hollywood Studios in March, immerses guests right into the middle of a Mickey and Minnie cartoon short and all the zaniness that ensues. Said TEA, “With a combination of physical sets, Audio-Animatronics figures, animated media and projection-mapping techniques, all syncing in time with trackless vehicles and a catchy original song and musical score, it turns a two-dimensional cartoon world into an immersive, eye-popping experience. Mickey and Minnie’s Runaway Railway raises the bar for all dark rides to come.”

Additionally, Bob Weis received the Buzz Price Thea Award, Recognizing a Lifetime of Distinguished Achievements. As president of Walt Disney Imagineering, Bob leads talented Imagineers around the world to advance the quality of immersive experiences across theme park resorts and cruise ships, with a focus on quality, storytelling and collaboration with diverse talents to achieve extraordinary results in experiences and live entertainment. Bob started his career at Walt Disney Imagineering working on Disney’s first international theme park, Tokyo Disneyland Park. He later had senior creative roles in designing Disney-MGM Studios (now called Disney’s Hollywood Studios); Tokyo’s second Disney theme park, Tokyo DisneySea; and the multiyear transformation of Disney California Adventure including Buena Vista Street and Cars Land. He was also the top creative executive for Shanghai Disney Resort before becoming president of Walt Disney Imagineering in 2016. Bob has been a champion of diverse talent and perspectives coming together to create experiences that guests from all over the world can enjoy, starting with his work at Tokyo Disneyland. At Shanghai Disney Resort he was a major proponent of blending Chinese culture and Disney storytelling, both through guest offerings and through close collaboration with Chinese Imagineers.

In addition to his Disney work, Bob has developed projects for several notable museums, has been an advisor to the Smithsonian, and has served on the board of trustees of the National Museum of the American Indian. He is also a member of the advisory committee of the Walt Disney Family Museum. Bob founded the Ryman Foundation Hani El-Masri Student Artist Award, which recognizes immigrant students who represent the diverse talents in our community. Bob supports Cal Poly Pomona’s School of Environmental Design, and was one of the founders of the school’s Bobby Brooks Studio, which, for 10 years, has built for students a culture of collaboration and narrative design methodologies in memory of a late Imagineer and alumnus.

“Congratulations to Bob Weis and to the entire team at Walt Disney Imagineering for these incredible achievements,” said Josh D’Amaro, Chairman, Disney Parks, Experiences and Products. “Over the past several years, Imagineers have taken creativity and storytelling to an entirely new level, and I’m proud to see that the experiences they have created are being celebrated by our Guests around the world and our peers throughout the industry. I look forward to sharing even more great stories with our guests as we continue to complete new experiences at our sites around the world.”

Congratulations to Bob and all of those who helped create Star Wars: Rise of the Resistance and Mickey & Minnie’s Runaway Railway!