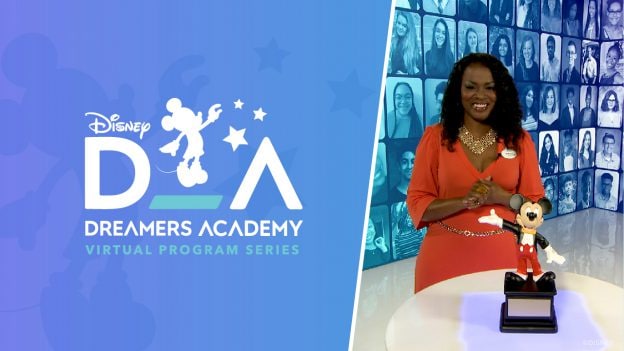 Wow, what an unforgettable night for the 100 teens across the US who participated in the first-ever Disney Dreamers Academy Virtual Program Series. A festive commencement celebration was held for these remarkable students who completed this landmark virtual program over a 12-week period.

For the past 13 years, Disney Dreamers Academy has brought together 100 students from across the United States for an all-expenses-paid trip to Walt Disney World where they participate in an immersive, transformational four-day learning experience.

At this year’s virtual commencement ceremony, the Disney Dreamers were treated to moving musical performances, celebrity tributes and more Disney magic than can fit on one screen!

Students also received a Disney Dreamers Academy Class of 2020 ring, which they showcased during the commencement ceremony. Magic burst off the screen in a finale like only Disney can produce, with a performance of “A Million Dreams” from The Greatest Showman.

This has been an exciting time for this select group of 100 teens who diligently participated in a series of workshops and sessions, where they received the inspiration and tools to “Be 100” and achieve their dreams.

To add to the excitement, Disney Dreamers were awarded career shadowing externships. A first for the program, each student will be paired with a professional from his or her field of interest for a spring 2021 mentoring experience. Externship participants include Walt Disney Imagineering, The Walt Disney Studios, ABC, Pixar, Essence Magazine, National Geographic and more.

This virtual series was inspired by the Disney Dreamers Academy program that has taken place at Walt Disney World Resort in Florida annually since 2008. It was available free to the 2020 class to continue educating and inspiring the students during the pandemic, and participation was off the charts!

The program is part of Disney’s commitment to helping the next generation of young people by inspiring them at a critical time in their development. The virtual series was launched after the March 12-15, 2020, event at Walt Disney World Resort ended early due to the pandemic.