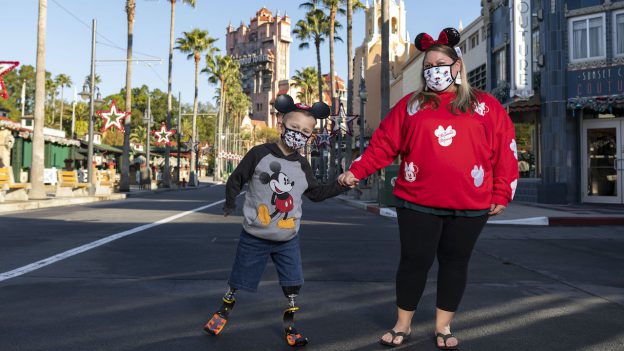 A first visit to Walt Disney World Resort is always a magical memory for families. For 8-year-old Jackson DeLude and his mom, Ashley, the experience was even more special than usual. Not only was it their first family trip to Walt Disney World, it was also the first time Jackson got to walk using his new blades.

Most kids his age ask Santa Claus for the latest toys and games. Jackson, who was born without fully developed legs, wished instead for the ability to run alongside his friends. Two kind-hearted NFL players from the Buffalo Bills heard Jackson’s story and knew they wanted to help. Both Orlando natives, Matt Milano and Gabriel Davis arranged for Jackson and his mom to fly to Orlando and have young Jackson fitted for two prosthetic legs.

The players covered the costs for everything, including a commemorative trip to Disney’s Hollywood Studios, where Jackson and his mom rode Walt Disney World’s newest attraction, Mickey and Minnie’s Runaway Railway. At the end of the ride, Jackson told his mom that his cheeks hurt from smiling so much.

Jackson’s Christmas wish finally came true as he bounced and skipped his way through the theme park. Watch the video below to witness this heart-warming, unforgettable moment