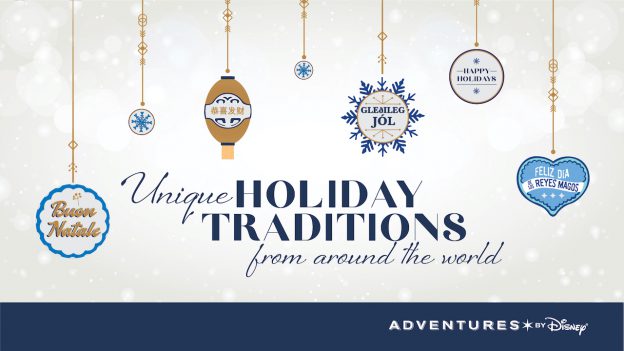 Holiday Traditions Around the World with Adventures by Disney

Our Adventures by Disney trips take guests to dozens of incredible destinations – each with fascinating cultures and stories to explore. And while these places are fun to visit all year round, in celebration of the season, we thought we’d give you a closer look at some truly unique holiday traditions and celebrations around the world.

We’ve heard of Santa’s elves, but what about Christmas trolls? In Iceland, you’ll hear locals tell tales of these mischievous, but benevolent, creatures, known as the Yule Lads. According to legend, thirteen Yule Lads travel into town, one visiting each of the thirteen nights leading up to Christmas Eve. Each evening, local children will leave their shoes out on the window. The Lads will place treats and small gifts in the shoes of good kids, while naughty children will wake up to rotting potatoes!

Each of the Lads has a unique personality and characteristic that are reflected in their name – such as Þvörusleikir (“Spoon-Licker”), Hurðaskellir (“Door-Slammer”) and Skyrgámur (“Skyr-Gobbler”). (The latter loves to gobble up skyr, an Icelandic dairy product similar to yogurt.) Oh, and don’t forget about Grýla, the mother of the thirteen Lads who keeps an eye out for naughty children.

While the Adventures by Disney trip to Iceland takes place in the summer months, you might just spot a few Yule Lads when you visit Dimmuborgir Lava Labyrinth, the home of these mischievous trolls. The locals are bound to have a few stories (or personal experiences to share!) about these notorious creatures.

The Chinese New Year, or Spring Festival, is celebrated sometime between January 21 and February 20, depending on the phase of the moon (hence why it’s also known as the Lunar New Year). Like many traditions, the holiday’s origins are rooted in folklore. One legend says that thousands of years ago, a terrifying beast, Nian, appeared to terrorize the villagers at the beginning of each new year. What scared it away? Loud noises and the color red – a color signifying prosperity and happiness. To this day, you’ll find New Year celebrations filled with fireworks and colorful red displays, décor and apparel.

Lunar New Year is also a time for families to feast together in what is considered the year’s most important meal. Elders traditionally give younger people “hongbao,” red envelopes filled with lucky cash. Another highlight is the Lantern Festival, in which illuminated lanterns are displayed in temples and carried throughout the nighttime parades as an elaborate finale to the time-honored celebration.

Adventures by Disney offers trips to China during the summer and early fall.

Did you know that a species of tree native to New Zealand is so naturally festive, it’s considered a “Christmas Tree?” Pohutukawa trees blossom around the holiday season – which is actually New Zealand’s summertime – and its beautiful crimson flowers look like decorations! This “Kiwi Christmas Tree” is an important symbol for New Zealanders, and with many references in poetry, art and song, it continues to be an essential part of the country’s holiday tradition. The tree also holds a prominent place in the traditions of the indigenous Māori people, who consider the Pohutukawa a “taonga” (treasure).

The brand-new Adventures by Disney New Zealand vacation offers trips across the breathtaking island country, including departures in November and December when the Pohutukawa are in full bloom.

Like other Latin American countries, many Peruvians celebrate a tradition called “La Noche Buena,” which literally translates to The Good Night. Held on Christmas Eve, this celebration is just as important as Christmas Day festivities. In the evening, families will gather at home to enjoy a feast and exchange gifts. During the holiday season, a traditional Peruvian meal might include turkey, tamales, salad and apple sauce. A popular holiday treat is the sweet cake-like bread called “panetón” (panettone). Is your stomach growling yet?

All across Peru, holiday décor usually features the Nativity manger, known as the “pesebre.” Sometimes, you’ll even see llamas and alpacas replacing traditional donkeys and camels in depictions of the scene!

When traveling with an Adventures by Disney Private Adventure or guided group tour to Peru, you’ll have an opportunity to book a trip during the holiday season. If you happen to be there on Christmas Eve, be sure to try the panetón with some hot cocoa!

Now let’s explore one of Italy’s most famous holiday stories. If you don’t associate the holiday season with a witch, then you’ve never met La Befana!

Legend says that La Befana appears every Epiphany Eve, leaving gifts for good children – and coal for the bad ones! – along the way. She is described as kindhearted old witch bestowing gifts, but unlike Santa Claus, she doesn’t want milk and cookies. Instead, in certain parts of Italy, families leave out broccoli, sausage and a glass of wine for her to enjoy.

When you embark on an Adventures by Disney guided group vacation or Private Adventure to Italy during the holiday season, perhaps you will spot La Befana flying around on her broomstick or hear more about her story. If nothing else, you’ll have the chance to eat like La Befana when you enjoy local Italian fare!

We hope you enjoyed your glimpse at holiday traditions and celebrations across the globe. While we only explored five of the destinations visited by Adventures by Disney, isn’t it fascinating to discover the unique stories, traditions and culture that make up just a fraction of the holiday celebrations around the world?

However you choose to celebrate the season, we wish you and your family good cheer and a happy new year!