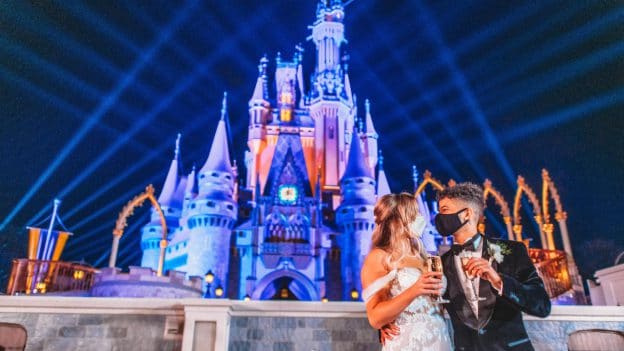 The “Happily Ever After” singer had his own fairy tale come true during a private, moonlit ceremony in Fantasyland with the glistening Cinderella Castle providing a regal backdrop. The couple celebrated their outdoor nuptials with an intimate gathering of family and friends in this epic storybook setting. After the couple said “I do,” they enjoyed a first dance, toasted the occasion, and cut their wedding cake. They departed the evening aboard a vintage double-decker bus that took them down Main Street, U.S.A. with the melodies of Jordan’s “Happily Ever After” performance playing in the park. Jordan recorded the song for the park’s nighttime fireworks spectacular.

Two days later the newlyweds posed for their Disney’s Fairy Tale Weddings portrait session before Magic Kingdom Park opened to guests. These popular in-park photo sessions take place before or after the theme parks close. Couples are able to remove their face coverings for a limited period of time during the shoots allowing for gorgeous photos and videography.

When the pandemic canceled Jordan and Ellie’s plans for a Disney’s Fairy Tale Weddings ceremony at Aulani, A Disney Resort & Spa in Hawaii, the couple asked their Disney planners to coordinate a safe, bespoke wedding at Magic Kingdom Park – a place that holds great memories for the couple.

The Disney Fairy Tale Weddings team was honored to plan Jordan and Ellie’s wedding and private portrait session, and we wish them their own “happily ever after”!

To learn more about the magic this special group of cast members is able to create for memorable and enchanting weddings and more, you can visit disneyweddings.com.