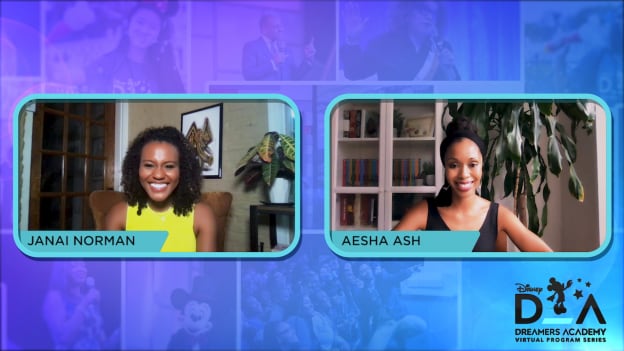 As we celebrate Martin Luther King Day this week and his enduring legacy, the holiday also serves as a reminder of the power of a dream – something which we believe in strongly at Disney.

One way we hope to inspire the next generation of dreamers is through the Disney Dreamers Academy, a mentorship program for teens.

In honor of MLK Day, we’d like to share some of the lessons from this past year’s program with hopes you will be inspired to chase your dream – no matter how big or small. Today we’re excited to bring you the first of a three-part series, “Chasing Dreams,” highlighting inspirational figures who served as mentors at this past year’s Disney Dreamers Academy Virtual Program Series. Their dreams led them to achieve greatness, and we’d like to share with you some of the tips they shared during the program that may help you achieve your dreams.

For part one, we are spotlighting a true inspiration, professional ballerina Aesha Ash.

Aesha always dreamed of becoming a ballerina. She was especially inspired to pursue her dream because she didn’t see many professional ballet dancers that looked like her and she wanted to change that for future generations.

Aesha went on to change the game when she joined New York City Ballet in 1996, where, for the majority of her seven-year career with the company, she was the only black female dancer. She broke another major barrier in 2020 by becoming the first and only permanent black female member of the faculty of the renowned School of American Ballet, where she teaches and serves as a role model for the next generation of ballet stars.

At the recent Disney Dreamers Academy Virtual Program Series, Aesha spoke with ABC News’ Janai Norman about her journey, the obstacles she faced as a black woman in ballet and the joy she finds in inspiring the next generation. Here are the highlights of their conversation, including why she says it is important “to never let anyone define who you are.”