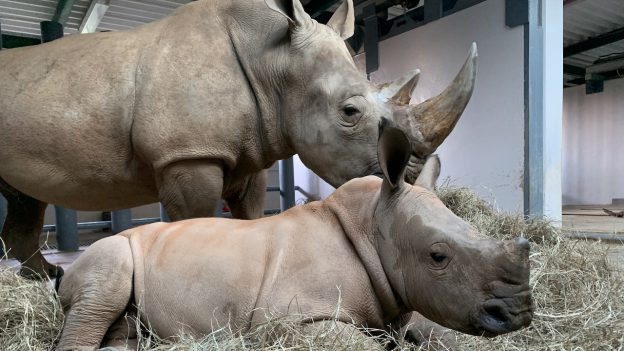 Ever since we announced his arrival at Disney’s Animal Kingdom Theme Park this past October, guests keep asking about our baby boy rhino and want to know when they can see him and his mom Kendi, since many of them followed Kendi’s pregnancy story on the Disney+ original series “Magic of Disney’s Animal Kingdom,” produced by National Geographic.

We also get a lot of questions about if he has a name.

Today, I am thrilled to share a video our keeper team put together of our rhino calf achieving some of his important first milestones. Be sure to pay close attention to the ending – our baby boy will actually reveal his name.

So, there you have it! Straight from the rhino’s snout.

Our keeper team wanted to make sure our baby boy had a name with special significance – they wanted his name to honor the wildlife rangers who protect rhinos around the world. Rhinos are the world’s second largest land animal and among the most endangered animals in the wild due to poaching.

Ranger’s name is just another way we join the Disney Conservation Fund in efforts to support rhino conservation. Did you know they have given more than 75 grants and awards to rhino protection projects? Most recently, they gave a rhino ranger, Sgt. Mutinda Ndivo with the Big Life Foundation, a Disney Conservation Hero award for his work to protect rhinos and other wildlife in more than 1.6 million acres of wilderness in East Africa, You can visit @DisneyConservation on Facebook or Instagram to learn more about these efforts.

We try not to have favorites, but our baby rhino has won us over with his spunky and curious nature. It has been a delight to see how much progress he has made as he in his development – from the close bond he has with his mom, to enjoying a good wallow in the mud, or zooming at objects with his budding horn. He is truly coming into his own and brimming with confidence.

We adore Ranger and know you will too. We’ll make sure to update you when he makes his grand debut and ventures out onto the savanna at Kilimanjaro Safaris to join the crash (a rhino herd) in the coming weeks. Follow @DrMarkAtDisney on Instagram and @DisneyASE on Facebook for more!