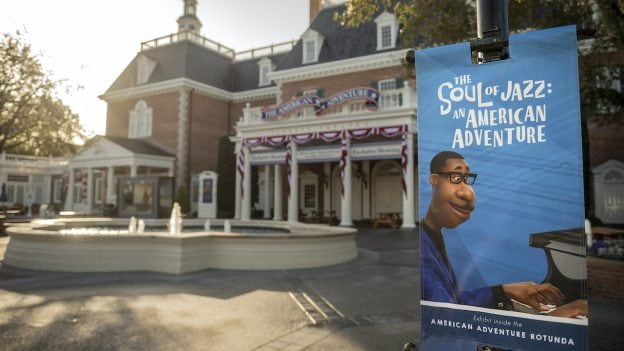 Experience ‘The Soul of Jazz: An American Adventure’ Beginning Today at EPCOT

It’s a special day at The American Adventure inside EPCOT, as we introduce “The Soul of Jazz: An American Adventure.” This new exhibit celebrates the distinctly American musical art form, originated by African Americans and fusing the influences of many different cultures.

Joe Gardner – the musician, mentor and teacher from Disney and Pixar’s new film “Soul,” streaming on Disney+ – shares the rich and surprising history of jazz by taking you on a musical tour of several influential American cities. You’ll also discover artifacts from legendary jazz musicians, including Louis Armstrong. And soon you’ll be able to use the Play Disney Parks mobile app to interact with the exhibit and test your knowledge of jazz.

Our team at Walt Disney Imagineering is thrilled to bring the compelling story of jazz to EPCOT, and we were honored to work with jazz experts and institutions across the country to explore the rich history and influence of this ever-evolving genre of music. We hope you are as inspired by what we discovered as our Imagineers were bringing this exhibit to life.

And as a special surprise, check out this new video from American pianist, band leader, and jazz extraordinaire Jon Batiste, who provided the original jazz compositions and arrangements for “Soul,” as he shares his excitement for “The Soul of Jazz: An American Adventure.”