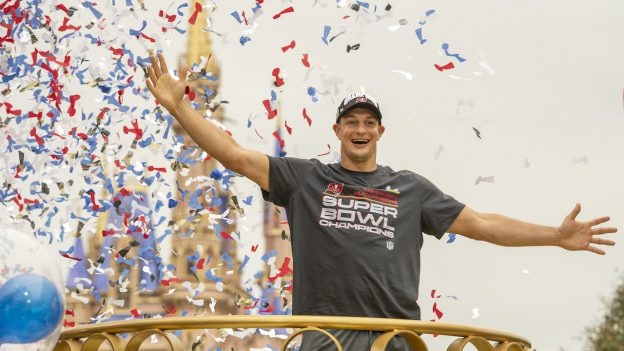 He Went to Disney World! Rob Gronkowski Celebrates Championship Victory at The Most Magical Place on Earth

In the moments following the Buccaneers’ toppling of the Kansas City Chiefs in Super Bowl LV in Tampa, Gronkowski and longtime teammate Tom Brady looked into the camera and shouted with joy, “We’re going to Disney World!” While plans are underway for Brady, named the game’s most valuable player, to visit later this year, Gronkowski brought the glow of victory to Walt Disney World on Monday as he enjoyed the sights, sounds and thrills of The Most Magical Place on Earth.

The gregarious tight end had his own adventure in a galaxy far, far away in Star Wars: Rise of the Resistance at Disney’s Hollywood Studios. He also braved “the wildest ride in the wilderness,” Big Thunder Mountain Railroad, at Magic Kingdom Park. And he even had a few moments to celebrate backstage near Cinderella Castle with Mickey Mouse and Minnie Mouse as seen in this video on @DisneyParks TikTok!

It was a fitting conclusion to Gronkowski’s magical season, as he and Brady added another chapter to their storied history together with an incredible performance in Super Bowl LV. The two connected on a pair of first-half touchdowns, sparking the Buccaneers to an early lead they would never relinquish. And with Gronkowski’s visit complete, now we will eagerly anticipate Brady’s next trip to Walt Disney World; the legendary quarterback has appeared in the famous “I’m Going to Disney World!” commercial more times than any player in history!

Likes (51)
Share He Went to Disney World! Rob Gronkowski Celebrates Championship Victory at The Most Magical Place on Earth