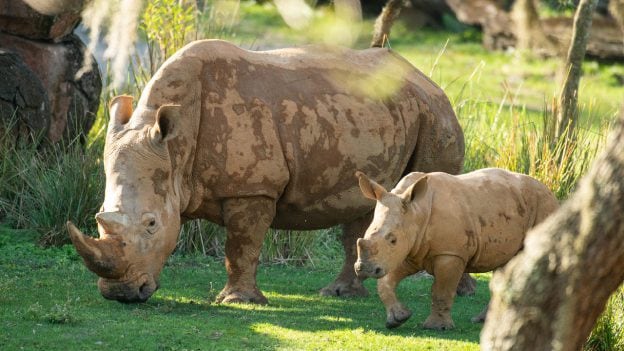 Ranger the Rhino Calf Joins the Herd at Kilimanjaro Safaris

I just love introduction days for the baby animals at Walt Disney World Resort – there’s palpable energy, pride and enthusiasm in the air, mixed with a healthy amount of anxious excitement – and today was one of those magical days.

Four-month-old white rhino calf Ranger, joined by his mom Kendi, made his big savanna debut this morning at Kilimanjaro Safaris at Disney’s Animal Kingdom Theme Park to join the crash (a rhino herd), marking a monumental rite of passage.

Ranger was eager to explore his new environment with his head high and ears up – plunging right into the mud alongside Kendi for a good wallow before running around to see all the new savanna sights. This rambunctious rhino calf made fast friends with his “aunties” Lola and Jao, and mom Kendi kept close by to make sure Ranger stayed out of trouble. Of course, such an adventurous morning requires lots of energy, so there was plenty of nursing and napping going on, too.

I can’t help but get a little misty-eyed when I think back to the moment we received the news of Kendi’s pregnancy – the calf would be the first for the herd in five years – and the keepers have eagerly cheered on Kendi and Ranger through each new developmental milestone. This “little” guy is now a big boy – he’s grown to be more than four times his birth weight, weighing in at nearly 600 pounds, and his size is matched by his big, bold personality.

Collectively, Disney’s Animal Care team has hundreds of years of experience, and their teamwork and expertise are crucial to ensuring Ranger’s successful transition to the savanna. But each animal is unique with their own personalities, development and family dynamics, so each onstage introduction is something special.

Did you know rhino calves and giraffe spend time bonding in backstage environments as they grow and keepers teach important training behaviors? Other animals, like gorillas or mandrills, may make their onstage debut within a few hours of birth, with baby clinging right onto mom’s chest.

Life is always interesting in the world of animal care, which is why I love working with this team of amazing professionals at Disney. Kendi and Ranger will start spending more time on the savanna in the coming days, so keep your eyes peeled for this dynamic duo on your next Kilimanjaro Safaris adventure.

If you want to learn more about how Disney cares for rhinos and helps protect these species in the wild, visit DisneyAnimals.com, check out “Magic of Disney’s Animal Kingdom” on Disney+, streaming now, and follow along on our Instagram and Facebook pages.