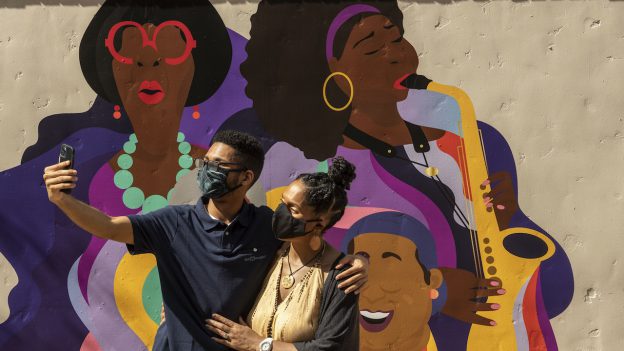 It was definitely a family affair this February as Disney Dreamers Academy alumnus Anthony Juba-Richardson and his family visited Walt Disney World for Black History Month to celebrate soulfully with music, food, art and more!

Anthony has always had a passion for music. His dreams led him to apply and be selected as one of the 100 teens who attended the 2019 Disney Dreamers Academy, the annual four-day, transformational mentoring program hosted by Walt Disney World, which encourages young people to pursue their dreams and make a difference in the lives of others.

Anthony continues to apply the lessons learned at Disney Dreamers Academy in pursuit of his goal of becoming a professional musician.  And in February, he and his mother, Donar, and stepfather, David, visited the Celebrate Soulfully experiences at Disney Springs and EPCOT to enjoy an added dose of inspiration.

Together, they admired artwork on display around Disney Springs from Black artists inspired by the Disney and Pixar movie “Soul.”  They dined on specially themed Mardi Gras cuisine at House of Blues while being surrounded by one of the largest collections of American folk art in the U.S., including many by African American artists.  Their day also included a little dancing while listening to the soulful R&B sounds of the band “Motown in Motion.”

Their day ended with a visit to the new “Soul of Jazz: An American Adventure“exhibit at EPCOT.  There, Anthony was truly inspired when he saw historic artifacts from some of his musical heroes, including Jazz legends Louis Armstrong’s trumpet and Charlie Parker’s saxophone.

As a bonus, Anthony had the chance to speak with one of the creators of the exhibit, Assistant Producer for Walt Disney Imagineering Jackie Herrera, to learn how it all came together.

Follow along with Anthony’s journey to find out which moment of his day left him speechless.

Ultimately, the combination of art, music and food led Anthony to one key lesson from the entire experience. “Never forget, your dream is what’s going to bring you life,” said Anthony. “Find your purpose!”

And we have some exciting news to share with you! You can still come and be inspired by these experiences, as many extend into March and beyond including the R&B music during Motown Mondays, the “Soul” inspired artwork at Disney Springs as well as the exhibit “Soul of Jazz: An American Adventure”at EPCOT.

Please join us throughout the year to hear more about Disney Dreamers Academy by following on Facebook, Instagram and Twitter. We also invite you to check out how we celebrated #BlackHistoryMonth, also now known as “Black History Always,” by sharing stories about the contributions, accomplishments and voices of Black cast members across Disney, including Demarcus Johnson of Disney Consumer Products, Games and Publishing; Chris Sheppard of Disneyland Resort; Tracey Powell of Disney Signature Experiences and Executive Champion of Disney Dreamers Academy; Carmen Smith of Walt Disney Imagineering; and Leonard Spencer with Disney Supplier Diversity.