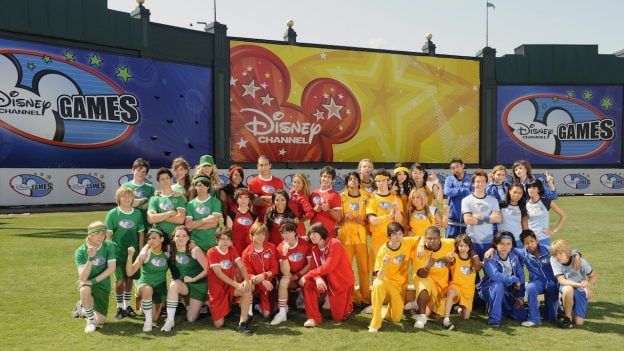 #ThrowbackThursday: Relive the Triumphs of 2008 Disney Channel Games at the ESPN Wide World of Sports Now Streaming on Disney+

That was the chant back in the Summer of 2008 when thirty-seven of Disney Channel’s biggest stars from around the globe (including Selena Gomez, Demi Lovato, and the Jonas Brothers) descended upon the ESPN Wide World of Sports Complex in Walt Disney World Resort to compete in the Disney Channel Games.

Now streaming on Disney+, you can relive all the rough and tumble challenges and re-watch all five episodes of tough competition!

Cheer on the Red Team Inferno, the Green Team Cyclones, the Blue Team Lightning, and the Yellow Team Comet. Each with one goal in mind: emerge victorious to claim the Disney Channel Games Cup and win money for their charity.

With unforgettable challenges that include weaving through an obstacle course while linked together, matching their rival teammates to their baby pictures, a human foosball game, and, of course, the UltraMega Ultimate Obstac-tacular Challenge. It’s non-stop Summer fun. Plus, each episode ends with a concert performance from a Disney Channel Star or group including two from Miley Cyrus.