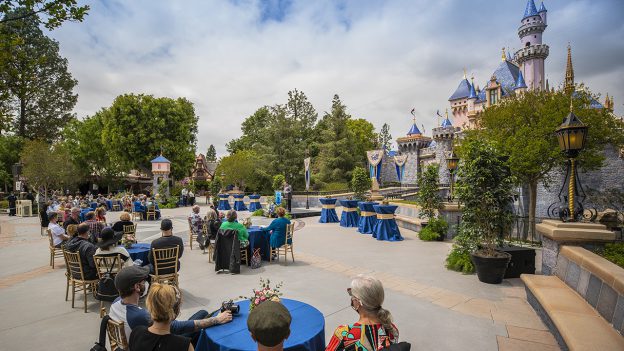 Many of them came to Disneyland park in 1970 to get a fun, part-time job while they were in school ⎼ and wound up staying for five decades, building careers, some meeting their future spouses here, making lifelong friends and a couple even eventually recruiting their children to work here!

Seven Disneyland Resort cast members who marked 50 years of service in 2020 — and one who marked 55! — were recently honored at Sleeping Beauty Castle for a special service award ceremony, prior to the theme parks reopening to guests after 13 months of closure due to the pandemic.

Honoree Larry Snow, who’ll mark 56 years with Disneyland Custodial in May and is one of the longest-serving cast members at the resort, recounted how he was actually hired by Walt Disney at a group interview in 1965. “Walt had a terrible cold at the time and I came down with a cold almost immediately after,” Larry said. “The guys in my fraternity were impressed that I caught a cold from Walt Disney!” Larry’s specially designed bronze statuette features Disney characters gathered around his photo.

Disneyland Resort President Ken Potrock kicked off the event, followed by leaders who honored each of the recipients. “The Disney magic is truly about our cast members,” Ken said. “Legacy is something we talk a lot about here at the Disneyland Resort, but legacy comes from our cast members and our culture and the fact that we really do believe in what we’re trying to do, which is to make people happy. Thank you for creating magic in so many people’s lives.”

Seven cast members who marked 50 years of service in 2020 also attended the ceremony, including Jan Fleener, who has been a vacation planner nearly her entire Disney career, met her husband, a former Jungle Cruise skipper, in the 1980s while working at the park – and their daughter even spent five years working at the resort. After the ceremony, her grandson was entranced by the characters who lined the steps of the Train Station in Town Square to wave goodbye to the honorees, who rode the Omnibus down Main Street, U.S.A., to cheers from cast members. Before that, all honorees and their guests were treated to a sneak peek of the reimagined Snow White’s Enchanted Wish attraction.

“I can’t tell you what this means to me,” Jan said. “To be away for a whole year and come back to this, well, it’s overwhelming.”

Check out this video for a peak at their ceremony, and please join us in congratulating all of the honorees!