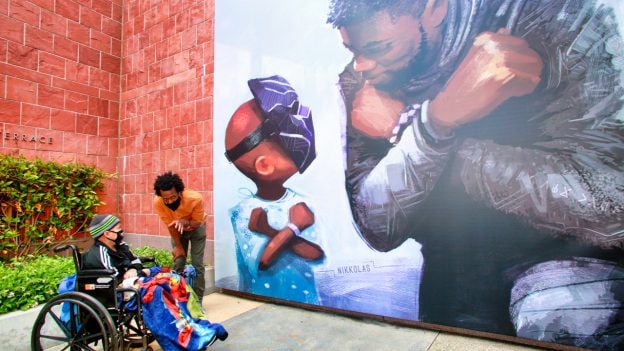 Yesterday, “King Chad,” the heartwarming and beautiful piece of art that was previously displayed in Downtown Disney District at the Disneyland Resort, found its permanent home at Children’s Hospital Los Angeles (CHLA) thanks to its generous donation by concept artist and former Disney Imagineer, Nikkolas Smith. Honoring the life and legacy of Black Panther hero, Chadwick Boseman, this tribute will now bring joy and inspiration to the patients at CHLA.

“It’s just a huge honor for me personally to be able to donate this piece of art to Children’s Hospital Los Angeles, where I know it will inspire patients going through treatments and serve as a reminder of not only Chadwick’s heart, but also his relatable struggle with cancer,” said Smith. “To see my art getting to live on at such a special place where it can bring hope to others – it is truly one of the greatest gifts I could receive.”

During his 11 years as an Imagineer, Smith worked not only on Disney’s children’s hospital initiatives, but also Avengers Campus, opening at Disneyland Resort on June 4 – making this art and donation even more meaningful to him.

“One of the very first things I did when I joined Disney was taking a tour of Children’s Hospital Los Angeles, which was incredibly moving for me, especially now as a father,” said Smith. “I was also humbled to visit the set of Black Panther, where I met Chadwick in-person and witnessed his kindness firsthand. Looking at this artwork now, it really married together so many meaningful moments during my time at Disney.”

The Walt Disney Company has enjoyed a decades-long relationship with CHLA. As part of our commitment to deliver comfort and inspiration to children facing serious illness, our children’s hospitals initiative has brought immersive experiences and personal moments to hospitals around the world, including CHLA, giving a little Disney magic during challenging times and enhancing the hospital experience for patients and their families.