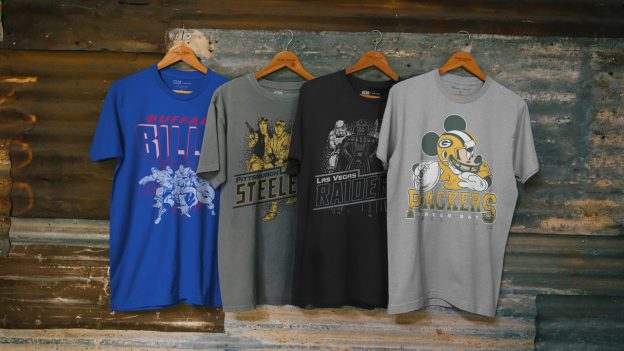 Are you ready for some football? The NFL season is set to kick off with the NFL Draft on April 29 on ESPN, and I’m pumped to announce that there will be an all-new way for fans to celebrate their favorite football teams, alongside their favorite characters.

We’ve collaborated with the NFL and Junk Food Clothing to develop a wave of apparel, which launches today with designs featuring Mickey Mouse and characters from the Star Wars galaxy and Marvel universe.

Available on NFLShop.com, NFL team retail locations, and on-site at the NFL Draft in Cleveland, this collection gives fans the perfect way to rep their favorite teams!

Find the endzone with “The Mickey QB” Tee, as Mickey Mouse strikes a quarterback pose in heritage NFL team uniforms.

Feel the force with the “The Rebels Team” which highlights the characters Luke Skywalker, Han Solo and Princess Leia, or go to the dark side with “The Empire Team” Tee, which features the characters Darth Vader, Boba Fett and stormtroopers.

This collection is perfect for NFL and Disney fans alike, so get yours so you can rep, and be sure to watch the NFL Draft on ESPN.